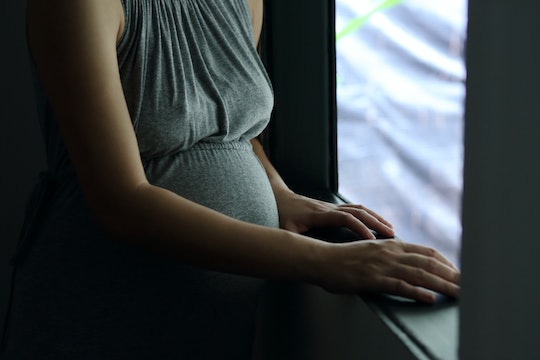 This Court Wants To Jail Pregnant Women For Drinking Or Drug Use, & It's A Terrible Idea

There is no question that opioid use has become a serious issue in the United States. Politicians and law enforcement officials have been very public about their continued concern over the state of the opioid crisis, and how to contain the issue. And while there have definitely been some thoughtful ideas bandied about, this is not one of them: a county in Montana wants to jail pregnant women for drug use or for drinking alcohol. And it's really, truly not the answer at all.

The state of Montana has been struggling to stem the rise of Neonatal Abstinence Syndrome (NAS), which is associated with drug dependency and withdrawal in newborns. Between 2000 and 2013, there were 10 times more babies who were exposed to narcotics of some form before they were born. In 2000, there were 0.8 substance-dependent births per 1,000; by the year 2013, there were 9 substance-dependent births per 1,000. It's a whopping increase, and clearly cause for concern. After all, the long term effects for these babies are severe. Difficulty succeeding at school, physical abnormalities stemming from low birth weight like smaller head circumference, reduced cognitive function, emotional or psychological behavior issues, and more developmental delays are just a few of the side effects.

But is jailing a pregnant woman who uses drugs or drinks alcohol really the answer?

The prosecutors office will start to seek restraining orders to prevent against pregnant women from using drugs or drinking alcohol. If it can be proven that these women violated that restraining order, they could face jail time, as he noted in his press release:

It is simply not satisfactory to our community that the protection of innocent, unborn children victimized in this manner and subject to a potential lifetime of disability and hardship relies exclusively on social workers removing the child from the custody of the mother at birth. This approach is not timely and has not proven to be a sufficient deterrent to this dangerous, unacceptable behavior and will no longer be the State’s policy in Big Horn County.

Harris is also encouraging the public to report instances of pregnant women using drugs or drinking alcohol if they've witnessed any.

But there are a number of reasons this kind of policy is ineffective: first, it isn't only illegal drugs that are causing problems. In fact, the Centers for Disease Control and Prevention found that prescription painkillers were the cause of 14,800 overdose deaths in 2008, more than heroin and cocaine combined. And it's important to remember that criminalizing drug use would most definitely deter pregnant women struggling with substance dependence from seeking medical attention. As vital as it is for any pregnant woman to have regular medical attention, mothers under the influence and their babies could require extra attention. Criminalizing drug use during pregnancies is not only ineffective, because making something illegal rarely stops it (especially with drug use), it's also potentially dangerous to both mother and child. It could prevent women from seeking medical help for fear of incarceration, leaving them and their babies even more at-risk.

Then there's the research; the American College of Obstetricians and Gynecologists found that "pregnant women with substance abuse disorders need health care, not incarceration."

The ACOG released a statement regarding Harris' decision in Bog Horn County, Montana which read in part:

About 50 percent of pregnancies in the U.S. are unplanned, and such a “crackdown” could result in the prosecution of expectant mothers who used alcohol or drugs before they even knew they were pregnant. Furthermore, the call to citizens to monitor the behavior of pregnant women and report women who are seen drinking or using drugs is deeply disturbing and counterproductive. Average citizens do not have the medical training and expertise to correctly identify if a pregnant woman is using substances that are harming her fetus. If such reporting results in a pregnant woman’s incarceration or containment, this could disrupt her prenatal care, and possibly ongoing addiction treatment, and put her health and the health of her fetus at risk.

And what happens to a pregnant woman who has been incarcerated and taken off opioids completely? The abrupt halt in opioid use can cause fetal distress, preterm labor, and could even result in infant death, according to the American Academy of Pediatrics.

The ACLU in Montana has already spoken out against Harris' decision to attempt to incarcerate pregnant women who use drugs or drink alcohol, and plans to challenge the prosecutor in court. Even a representative for the Montant Department of Justice told The Huffington Post that Harris did not contact the department before making his announcement.

Hopefully, jailing pregnant women who are struggling with substance abuse will not happen anytime soon.

Because it's just not the right answer, any way you slice it.