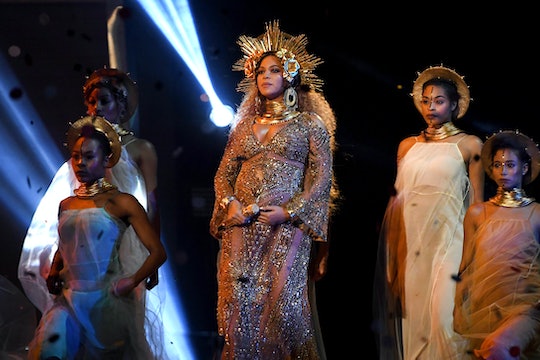 This New Beyoncé Illuminati Rumor Is The Weirdest One Yet

The conspiracy theory that Beyoncé is a member of a secret society bent on world domination is obviously absurd, if for no other reason than she's already Queen of the World without anyone's help. But the lunatic fringe, emboldened by the convenience of the internet, isn't backing down from their claims, and this Beyonce-Illuminati rumor might be the weirdest one yet, and that's really saying something. The latest wacky story alleges that Beyoncé was bragging on the set of JAY-Z's "Family Feud" video about her genetic ties to Illuminati elites, because if you're in a secret society, of course you're going to talk openly about it to anyone who will listen.

The fake news site "YourNewsWire" (more on that coming up) claims that she learned about her royal blood via a DNA testing kit she received as a gift from Gwyneth Paltrow's daughter, Apple Martin. I don't know about you, but when I was a young girl, I didn't make it a habit of giving my parents' friends weirdly personal gifts. But they're famous, and maybe they do things a little differently than the rest of us. Beyoncé then supposedly "told close friends and associates" that the test revealed that she's related to the Bushes, the Rockefellers, and the Queen of England. A representative for Beyoncé has not yet returned Romper's request for comment, probably because she has better things to do than email me, "HAHAHAHAHA that's a ridiculously stupid lie!"

First, let's look at the source, "YourNewsWire," which both U.S. and European Union intelligence officials have classified as a Russian propaganda proxy site, according to Media Matters. It was banned from Google's ad network after a write-up in The Sunday Times last year, yet still, the site gets three to five million hits a month, according to the Evening Standard, and reportedly counts E.L. James, Roseanne Barr, and Elijah Wood among its fans. The site has even directly engaged in a feud with Snopes, the very hallmark of internet hoax debunking, according to The Hollywood Reporter.

The byline on YourNewsWire's latest Beyoncé-Illuminati link (no, it's not the first) is attributed to "Baxter Dmitry," a name that The Huffington Post reported is not registered in any U.S. public records. This same author reportedly used a stolen photo of a Latvian computer programmer for his bio until The Sunday Times questioned its veracity and tracked down the real owner. And if that's not enough for you, he was one of the originators of the "Pizzagate" hoax.

If you're the type to play devil's advocate and remind everyone that even a broken clock is right twice a day, there's plenty of additional proof that "y'all haters corny with that Illuminati mess," as Bey so eloquently put it. Despite one-hit wonder Charlie Daniels' claim that the Illuminati is "not a frivolous subject" (and the odd choice by Fox New to not specifically disagree with that), it is not real. Though a real secret society of the same name briefly existed in 18th-Century Bavaria, according to the BBC, the modern idea of the Illuminati was a parody created by Playboy writer Robert Anton Wilson in the 1960s as a way to teach the public critical thinking skills. Boy, did that backfire.

The only "evidence" anyone can seem to point to for proof of Beyoncé's Illuminati ties is her penchant for flashing a hand signal they claim is an Illuminati triangle, though years ago the singer made it clear that it's actually a diamond, and the symbol for her husband's record label. It's incredibly easy to come up with false "clues" if you have a goal in mind (I did so myself for a satire piece last summer), but if you think logically, it's obvious that there's no truth to the matter. Besides, those ancestry DNA kits are also a hoax, so even if Queen Bey is related to Queen Liz, that's clearly not how she heard about it.