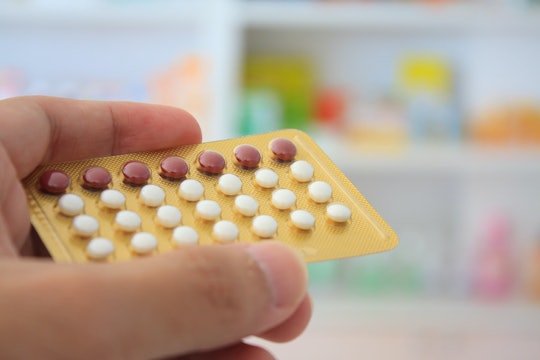 When birth control was originally released nearly 60 years ago, users dealt with backlash; they were labelled as promiscuous women, denying laws of nature. Since then, birth control has leapt over many hurdles as reproductive health continues to be a political battlefield rather than a human right. But, a new birth control pill for men may help transfer the burden of responsibility, including a frustrating side effect women have dealt with for years.

Male birth control has been a topic of conversation for some time, with many wondering why birth control became solely a women’s responsibility. Instead of being taught effective safe sex education, many students were taught with abstinence-only programs or that if you had sex, birth control was primarily a woman's job, aside from the expectation that men should use condoms.

The typical argument against short-term male birth control was that it’s easier to block one egg than the mass production of sperm that occurs daily, as Business Insider outlined, but a new study released this week is revealing great strides forward. Developed with funding from the National Institutes of Health, the new pill dimethandrolone undecanoate (DMAU) currently stands as the best hope for a non-permanent male contraceptive yet.

In some ways, DMAU is similar to the birth control pill for women. According to Endocrine Society, the study’s senior investigator, Stephanie Page, said the pill combines activity of an androgen (like male testosterone), and a progestin, and is taken once a day.

But, DMAU bares more similarities to women’s birth control than just style and dosage. Any woman who has had experience with birth control methods — from the pill to IUDs and beyond — can testify to the wide range of side effects these methods bring. For some, the unknown side effects have been a major barrier to pursuing birth control for themselves, and although everyone hopes for flawless birth control plans in the future, it’s a little refreshing to see that men could bear the same burden one day.

Along with a few caveats like having to be taken with food, The Hamilton Spectator reported that usage had a slight negative impact on cholesterol levels. All groups who took DMAU saw weight gain and decreases in HDL (“good”) cholesterol, but Endocrine Society reported that those were mild. Everyone involved passed safety tests, including checking liver and kidney function.

Some concern has also been shown in regard to altering testosterone levels and the side effects that come from it. In 2016, CNN reported that a study conducted on male birth control was halted due to side effects involving depression and mood disorders. Although no one should have to endure such serious side effects in the pursuit of birth control, one researcher involved was reminded of a 2016 Danish study published in JAMA Psychiatry. In looking at prescriptions filled during an 18-year period, three out of every 100 women between 15 and 19 taking hormonal contraceptives will become depressed over the course of a year, as CNN reported. It’s important to note what side effects may halt studies in men, but are perfectly normal and acceptable in the average women’s pursuit to exercise reproductive control.

In the early stages of birth control, women had to deal with the medical consequences that comes from diving into uncharted territory. Enovid, the first brand of birth control, contained more hormones than necessary to prevent pregnancy, according to The Hamilton Spectator. And, although it helped revolutionize safe access to birth control, Enovid ended up being linked to an increased likelihood of heart attack or stroke, according to The Hamilton Spectator. It took nearly a decade for scientists to reformulate a pill with less hormones that was just as effective, the publication reported.

Side effects for birth control in women today can range from weight gain, nausea, dizziness, breast tenderness, spotting, mood changes, and missed periods, among others. And, while there is some concern around altering male testosterone or any other hormones, birth control in women also relies on using hormones to alter the body’s chemistry. It takes more than a simple “please and thank you” to prevent ovulation.

In addition to dealing with side effects for decades, women also had to handle birth control pushing their bodies into a new political light. Before Enovid’s development, the country’s general squeamishness over birth control led to anti-obscenity laws, which prevented doctors from even discussing the topic with women. It took a Supreme Court ruling in 1972 for oral contraceptives to become legal for everyone, according to TIME; before then, contraceptives were reserved for married couples, the publication reported.

Male contraception is ultimately beneficial and DMAU is proof that it can be a reality very soon. But, it needs to be remembered that male contraception is following a long, winding legacy of birth control rights, in which women have long been expected to bear the brunt of the consequences.