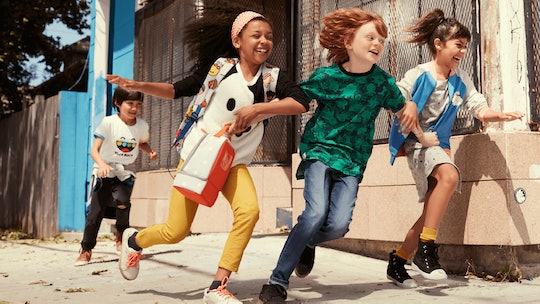 This New Children’s Clothing At Target Is A Big Deal

On Tuesday, popular children's mobile app developer Toca Boca announced an amazing new collection coming to Target stores next week. A new gender neutral children's clothing line is coming to Target, just in time for back-to-school shopping. Featuring the brightly colored characters from its series, Toca Life, parents won't have to worry about trying to find something that isn't pink and covered in glittery butterflies for their daughters, or camo and nothing but dinosaurs for their sons. And if gendered styles are your kid's thing, that's cool too: Target shoppers will still have their favorites in their regular Boys and Girls sections of the stores.

Toca Boca's Head of Consumer Products Mathilda Engman said in a statement, "Everything we make at Toca Boca is designed for all kids; it’s our mission to make sure no kid ever feels excluded by Toca Boca." Because the clothing isn't specifically designed for one gender or another, it will feature in a special location within Target stores. "True to those values the collection was designed with inclusivity in mind, and we are so excited to see it will be merchandised together as a collection sitting between the boys and girls aisle of many Target stores."

With Target as the sixth largest retailer United States, it's incredibly important to see the company taking such a powerful step forward and will make a huge difference for all kids, regardless of gender. How a kid dresses themselves can be a fraught issue — hell, even as a 35-year-old, it's still an issue for me. Kids are bombarded with messaging and social cues from their family, their peers at school, and the media about what it means to be a boy or a girl, and how these notions of gender "should" look a certain way for each.

But what if, like my son, you just want a Moana t-shirt that doesn't have Maui on it because you think that Moana is a badass? It's a common issue for parents whose children don't innately see or define gender in the ways that the rest of the world might. To my preschooler, Moana is just another character as any other Disney figure — but he doesn't seem to understand why we can't find shirts with just Moana on them in the boys section.

This is also what makes the Toca Boca gender neutral clothing line at Target so vital for kids who might be trans and are still in the process of defining their own gender. But your child doesn't have to be trans to appreciate clothing that don't fall within such stubborn traditions of "girl = pink" and "boy = blue" and every variation on these tired fashion themes. It also helps that the line of clothes is super cute and adorably quirky.

In addition to a line of gender neutral clothes, the Toca Boca collection at Target will feature "apparel, accessories, sleepwear, backpacks, lunch bags, bedding and activity books," according to a press release from the company. So in addition to sporting new duds for back to school, your kid can carry around a seriously amazing backpack and lunch bag.

The entire collection, including gender neutral clothes, accessories, and other goodies, will debut on July 17 in both stores and online at Target.