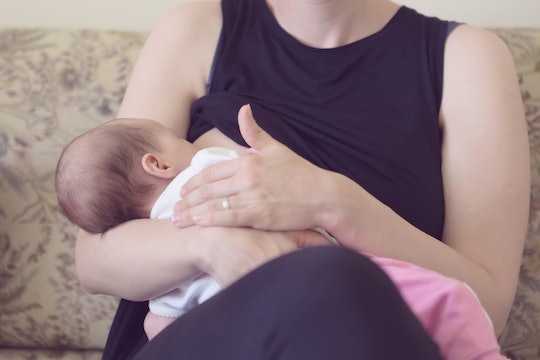 Breastfeeding, while it provides so many great nutrients and benefits to both babies and moms, can be a major inconvenience. When mothers have to stop whatever they're doing to breastfeed their baby or pump in public, it can be more of a burden than a blessing. Women who are still attending school, but are also moms to children, especially know this to be true. But the state of Illinois is trying to help moms in school, as this new law helps breastfeeding students and it is some amazing progress being made towards ending the stigma of public breastfeeding and supporting moms to do so.

School districts in Illinois will have a new law made into effect in 2018, according to Fox News, which would require public schools to provide a room (other than a bathroom) with an electrical outlet for nursing mothers and a refrigerator for them to store their milk. They also can't be penalized for getting up to leave class to pump. This is awesome.

The law was signed by Illinois Gov. Bruce Rauner last month, according to the Chicago Tribune and will work to "reduce barriers" for breastfeeding students and "protect them from academic consequences" for doing so. "We want to make sure we have healthy babies and a supportive environment for young mothers," state Rep. Sonya Harper who proposed the new law, told the Chicago Tribune. "They have so much to worry about already."

Harper is right — new mothers, especially teen moms, already have so much to worry about. The last thing they should have to do is worry about when and where they can breastfeed. By giving them their own room to breastfeed or pump, they have a way to control how they want to raise their baby and the option of doing so. According to the Chicago Tribune, lawmakers and school officials are generally supportive of the bill.

In 2014, according to the Chicago Tribune it was reported that 53 percent of teen mothers in Illinois were breastfeeding one month after their babies were born, but the number significantly declined after their babies turned 12 weeks old. One 2012 study found that teen moms were the least likely to breastfeed out of any other population group — and found that this was due to their experiences as new mothers, youth and dependency, and lack of education about breastfeeding.

By having the option of pumping during school, this could very well allow teen moms to want to breastfeed beyond one month and raise awareness about the importance of breastfeeding during those first months of motherhood. Breastfeeding has so many amazing benefits for both mother and baby — it improves the health for both mom and baby and saves a lot of money. Teen moms can definitely benefit from this.

Thanks to nursing rooms in public schools in Illinois, teen moms will now have the opportunity to breastfeed their babies longer and have the ability to be more in control of this very important decision.

More Like This
Breastfeeding & Sex: Experts Explain What To Expect
Patrick Mahomes & Brittany Matthews Welcome Baby #2
Jodie Turner-Smith Opens Up About Being Secretly Married & Pregnant
Amazon Just Launched A New Feature To Tip Your Delivery Driver $5 — At No Cost To You