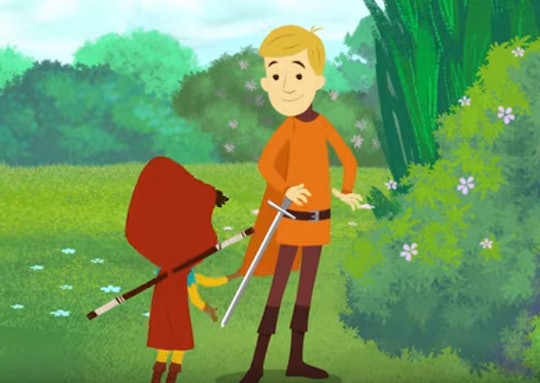 It can be difficult to stand out in the animated series game. There are so many great concepts out there and of course it's so tough to find a story that will appeal to both kids and their adults. That's the sweet spot, after all, isn't it? Holding the attention of a child while keeping parents engaged and intrigued. I have a strong suspicion that The Bravest Knight will hit exactly that sweet spot. This new LGBTQ-inclusive animated series is set to launch on Friday, and already it has people excited for some real change.

More Like This
Here Are 25 Shows You Can Feel Good About Your 2-Year-Old Watching
What To Stream Right Now For Kids Who Love History
30 Of The Best Kids’ Shows To Stream On Amazon Prime With Your Family
Exclusive: Cookie Monster Puppeteer Tells Us Why Kids Will Love His New Show Donkey Hodie

The Bravest Knight is based on a hugely popular digital book that came out in 2015 by children's author Daniel Errico called The Bravest Knight Who Ever Lived. The story follows the adventures of a young pumpkin farmer named Cedric who is called into action to become a hero. While Cedric manages to save both a princess and a prince in the tale, he is given a real gift that everyone in this life should have; he is able to choose which person he loves enough to marry. He chooses his prince. The book was made into an 8-minute short film in 2016 by Hulu and was so successful that the streaming giant decided to go ahead and create an entire animated series based on the tale. The new series will premiere on June 21 with five episodes.

The Bravest Knight will continue the story of Sir Cedric (who will be voiced by Grey's Anatomy actor T.R. Knight), his husband Prince Andrew (voiced by Star Trek: Discovery actor Wilson Criz), and their 10-year-old daughter Nia, played by Storm Reid from A Wrinkle In Time. Grammy nominee and LGBTQ activist Justin Tranter wrote and performed the theme song.

Other celebrities like TLC's Jazz Jennings and Backstreet Boys' AJ McLean will be lending their voice talents to the LGBTQ-inclusive series aimed at kids between the ages of six and nine, as per The Sun-Sentinel. Jennings shared a post about the new show on social media about voicing the character of Lily the Fairy. Jennings noted in her tweet that Hulu would be donating $50,000 to The Trevor Project, a 24-hour suicide hotline serving LGBTQ teens, for the first 50,000 views of the show.

In 2016, Bravest Knight author Errico told HuffPost that he believed visibility in the media could make all the difference to LGBTQ kids:

It's important for kids' movies and TV to introduce the world in a nurturing and positive way, which means creating multi-dimensional LGBT main characters... I would like for kids to see courage and kindness in Cedric. This is a story about reaching your potential and being true to yourself. Regardless of whether kids grow up to relate to Cedric or not, I hope that they find a message of acceptance for themselves and others.

The Bravest Knight will hopefully offer kids and parents a positive message of acceptance and love they can carry with them throughout their lives.

This is a win/win all over the place.