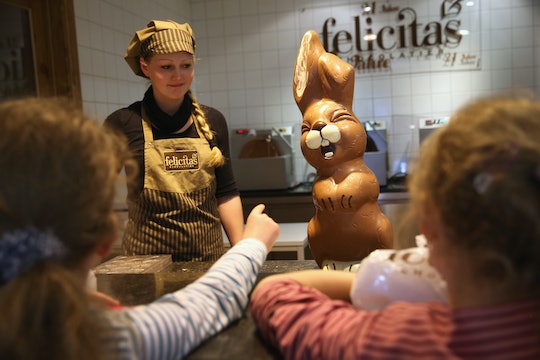 This Study Found The Key To Kids' Happiness

Few things bring me more joy than chocolate. My kids probably, also my dog sometimes. But chocolate? Especially like really fresh, creamy chocolate that is in no way good for my health no matter how you slice it? Eating a square of the good stuff is my personal happy place. Especially if I'm having a bad day, it's like eating a delicious hug. So it didn't come as a major surprise to me when a new study found the key to kids' happiness might have a little something to do with chocolate. Which is good news for parents who are out there buying up all of that creamy goodness right now.

According to a research recently shared with The Globe and Mail by Shayla C. Holub, a psychologist at the University of Texas at Dallas and Cin Cin Tan of the University of Michigan, chocolate might be the secret to bringing kids joy. I know; you're rolling your eyes right now like this is the most obvious thing in the world, but the study goes deeper than you might think. Holub and Tan looked at the co-relation between developing eating habits and children's emotions. To that end, the scientists looked at kids between the ages of four and nine to see how food intake could be related to mood, as Holub told The Globe and Mail; "We were looking at emotional eating behaviours in kids. So we induced moods."

Imagine being one of the kids involved in this study.

How did they induce moods? They put on Disney's The Lion King and focused on showing the kids three different scenes; a happy scene, a neutral scene, and the scene where Simba's dad Mufasa dies and everyone needs to go to therapy forever to recover. The children were randomly placed in each group and offered their choice of chocolate or goldfish crackers.

And here is what the research, which was originally published in the online journal Appetite, found:

Kids who were watching the sad scene were more apt to reach for the chocolate than the goldfish. If you watch the same scene, tell me you don't want to reach for a bowl of chocolate-covered almonds.

Children who watched a happy scene were also more likely to reach for the chocolate, while kids watching the neutral scene were reaching for the goldfish crackers as often as the chocolate. As Dr. Holub explained to the University of Texas newsletter:

The kids watching the saddest video ate the most chocolate. There was a significant drop in consumption among the ones watching the happy video, but they still consumed more chocolate than the neutral video group. This suggests that children eat in response to both happy and sad emotions, but more for sadness.

In other words, kids are reaching for chocolate for comfort, just like us grown-ups.

Another factor which seemed to affect the way children consumed chocolate was age; Holub noted that older children were more apt to reach for chocolate, and explained that this had more to do with mood association with food. Chocolate is considered a "happy" food, associated with big events like birthdays, treats, and holidays like Easter.

Holub told The Globe and Mail that restricting children's diets and refusing to allow them treats is not the way to diminish the side effects of emotional eating (like depression and binge-eating):

Restrictive feeding practices also seem to be problematic — telling children they can’t have something makes it a preferred food, and when they gain access to it, they immediately eat more of it. That’s another way that children learn to stop listening to their internal cues.

Instead, it might be more productive to avoid using food as a reward or punishment if possible. Holub recommends allowing a little "moderate" indulgence, and with Easter just around the corner... I couldn't agree more.