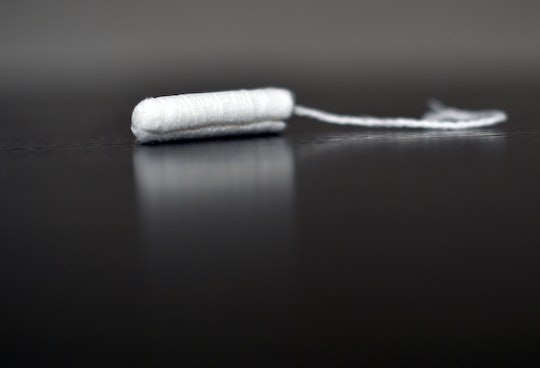 You’ve heard of smartphones and smartwatches, but now Harvard engineer Ridhi Tariyal is developing a smart tampon with her partner, former Harvard researcher Stephen Gire. With the blood from your used tampon, Tariyal's startup, NextGen Jane, hopes to make major strides in women's health, including creating a new tampon that could change pregnancy health — and women's health in general — for the better. This new tool, which NextGen Jane aims to start rolling out to consumers between 2019 and 2020, could offer an easy, non-invasive way for women to take control of their health. This means providing users with information that helps them diagnose conditions like endometriosis and ovarian cancer, and looking at how the vaginal microbiome (the microorganisms that live in your vagina) may affect pregnancy outcomes. NextGen Jane hopes their tool will help streamline healthcare by creating more of a one-stop-shop for women's and reproductive health. Read: Fewer trips to the doctor and more insight into health risks and concerns.

"Our entire tech is meant to answer a bigger question: 'How can I manage my reproductive health in a seamless way and get the answers I need so I can have children how and when I want them?'" Tariyal said in an interview with Romper.

Even though you probably have an OB-GYN and dedicated specialists, visiting your doctor once a year (or sometimes less) isn't always enough to catch some diseases, like ovarian cancer, before they progress. Yet we're discarding valuable blood samples when we menstruate every single month. Instead of wasting your used tampons, why not send them in for testing to diagnose a slew of diseases and make sure your health is in check?

That's where smart tampons come into play. You may have already heard of Looncup, the smart menstrual cup that tracks your cycle on a phone app, but these tampons are less of a gadget and more of a diagnosis tool. While the tampons themselves aren’t actually "smart" (they're just regular tampons), what Tariyal and her research team hope to do with them is. Here's how it works: When you have your period, your body sheds cells from your uterus and ovaries, and those cells are optimal for genomics testing. Using your used NextGen Jane tampon, which you’d normally trash or flush, the startup would conduct a series of experiments to look for everything from your risk for premature labor to endometriosis. Here are a few of the diseases and conditions NextGen Jane could help diagnose.

One in 10 American women suffers from endometriosis, according to the Endometriosis Foundation of America (EFA), an often painful condition in which the tissue that lines the uterus grows outside of the uterus. The result is often painful cramps, an extremely heavy menstrual flow, nausea, periods that last longer than seven days, diarrhea, the urge to urinate frequently, and, when left untreated, it's sometimes linked to infertility. Though there are still unanswered questions around endometriosis' link to infertility, research does suggest there may be a connection. In a study published in Gynecologic and Obstetric Investigation, 11.6 percent of women with endometriosis had infertility, versus 3.4 percent of women without it.

"Most of us would like to avoid a surgery just to get a diagnosis."

Although an estimated 176 million women worldwide suffer from endometriosis, according to EFA, many women aren't ever diagnosed because they think they just have "normal period pain," Dr. Eva Martin, CEO and founder of medical device startup Elm Tree Medical Inc. Studies told Romper in an interview. Plus, the only way most women can confirm that they have endometriosis is through surgery. "The 'gold standard' for diagnosing endometriosis is laparoscopy (surgery to look inside the abdominal cavity)," she tells Romper. "Most of us would like to avoid a surgery just to get a diagnosis."

Tariyal wants to change that. UCSF professor Linda Giudice, MD, PhD discovered that changes in your DNA can actually indicate whether you may suffer from endometriosis in a study published in the scientific journal Endocrinology. And because tampons collect the endometrial lining your body sheds each month, SmartGen Jane hopes to continue along the same vein of research by studying the blood and cell samples on your used tampon to help diagnose the disease — no surgery required.

Though it's still early on in development, the work could be a game-changer in helping women avoid unnecessary surgery and helping to decrease infertility that untreated endometriosis may cause. It's also the first test NextGen Jane plans to make available to the public in a few years. "The current [method] is simply not a sensitive way of testing," Tariyal tells Romper. "If there's any non-invasive way you can [gather that information], we should be taking that opportunity."

In addition to collecting cells from your endometrial lining, tampons can also grab mutated tumor cells that indicate ovarian cancer. Ovarian cancer affects roughly one in 75 women, according to statistics found on Cancer.org, and women diagnosed with ovarian cancer have a one in 100 chance of dying from it. Treatments wreak havoc on women's reproductive systems. Most cancer treatments, such as surgery and chemotherapy, can eliminate or reduce childbearing ability, says Martin.

Research published by the American College of Obstetricians and Gynecologists states that epithelial ovarian cancer is most commonly found when it's already advanced, leaving patients with only a 20 percent to 30 percent five-year survival rate. When caught earlier, the survival rate of ovarian cancer goes up. However, there's currently "no effective strategy for ovarian cancer screening," stated the 2011 report.

New research, published in 2015 in the journal Gynecologic Oncology, stated that notable changes in the vaginal microbiome (reminder: those microorganisms that call your vagina home) may point to cancer. NextGen Jane's system of using tampons to test for this form of cancer could be a minimally invasive way for women to catch it before it's too late. As soon as NextGen Jane's endometriosis test goes out, ideally in the next few years, ovarian cancer testing will be next in line.

About one in 10 infants are born prematurely, according to statistics from the Centers for Disease Control and Prevention. Preterm labor (when a mother goes into labor before 37 weeks) can cause a wide range of issues for babies, including difficulty breathing, vision, and hearing problems, among others, according to the CDC. Martin says that medical professionals run tests and ultrasounds to try to predict and prevent preterm labor, but "there isn't a test we can do on all women and get usable results to predict preterm labor. Instead, we have to tailor the tests and treatments to each person."

Although there are ways to determine whether a mother is at risk for preterm labor (including being pregnant with multiple children or looking for uterine or cervical abnormalities, according to the American Pregnancy Association, says Tariyal, doctors don't always test for it. Part of the reason, she believes, is due to the fact that there isn't really a tried-and-true treatment or way to prevent premature birth.

Now, brand new research published in the Proceedings of the National Academy of Sciences suggests the potential ability to use vaginal microbiome data to predict preterm labor, which tampons could easily collect. A 2008 study in the UK medical journal the Lancet, suggests that women who give birth prematurely in hospitals that specialize in premature birth are more likely to have a healthy child. Therefore, it would make sense for many women to be aware of their likelihood to enter premature labor and use that knowledge to help inform their choices, such as where they'd prefer to give birth.

The Tampon Of The Future

Although a wealth of information about women's and pregnancy health sounds like a no-brainer, more tests are not always better, Martin points out. The Food and Drug Administration and American Congress of Obstetricians and Gynecologists recently released statements against ovarian cancer screening tests, saying that they're too likely to miss cancer or accidentally diagnose cancers that don't actually exist. The same could be said for screening for endometriosis, Martin says. A false-negative test could cause a woman with endometriosis to skip a visit to the doctor, and a false-positive could lead to unnecessary interventions. "I love the idea of testing blood we usually discard, but we still need to be mindful about which tests we perform and the harms and benefits to patients," Martin says.

Tariyal agrees that diagnosis with faulty results should definitely be avoided. "We're going to evaluate our false-positives and negatives very closely," she says. But the fact of the matter is that, for many diseases (endometriosis, for example), the standard is already so low that any improvement would be notable.

"We want to find every possible way to impact a woman's life."

Right now, NextGen Jane is in the middle of testing. "Stephen and I are committed to exploring every reproductive question on a woman’s mind and every worry that plagues her at 3 a.m.," Tariyal wrote in a recent Medium article that maps out her research. But they need more information, especially from healthy women for a control group, says Tariyal. “We can’t understand the genomic data of the sick population without trials from healthy women.”

NextGen Jane may soon be testing in your hometown and is collecting information via an interactive quiz, "What Would Your Body Tell You?" "Women should be empowered with data," Tariyal tells Romper. "We want to find every possible way to impact a woman's life."