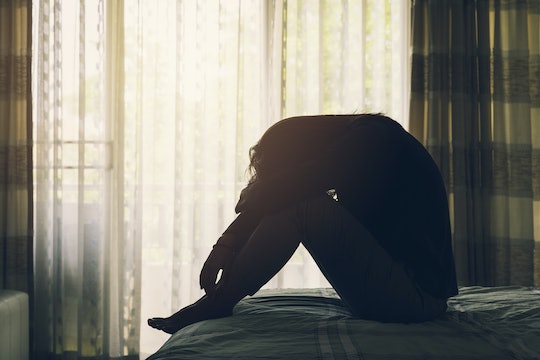 On Tuesday, Texas Gov. Greg Abbott signed HB 214 into law during a special session of the state's legislature, according to The Austin Chronicle on Twitter. The new Texas anti-abortion law effectively taxes women who seek to obtain an abortion in the state by barring health insurers from providing coverage for abortions. As of Dec. 1, women in Texas must purchase a separate health insurance premium to cover abortions.

The law has basically turned abortion coverage into an insurance rider, much like the maternity riders that the Affordable Care Act eliminated — which is still just barely law thanks to surviving failed repeal efforts. But this new anti-choice law in Texas essentially requires women to somehow intuitively know they will need abortion coverage, as if abortions are some kind of medical procedure carefully planned months in advance. Spoiler alert, Texas — they're not.

In a statement on his website, Abbott expressed his gratitude for the Texas legislature getting this bill to his desk so quickly.

As a firm believer in Texas values I am proud to sign legislation that ensures no Texan is ever required to pay for a procedure that ends the life of an unborn child. This bill prohibits insurance providers from forcing Texas policy holders to subsidize elective abortions. I am grateful to the Texas legislature for getting this bill to my desk, and working to protect innocent life this special session.

Apparently, "Texas values" includes punishing victims of sexual assault, as the law makes no exception for mandating abortion coverage outside of medical emergencies — and this includes pregnancies as the result of rape or incest.

State Sen. Sylvia Garcia told The Texas Tribune that the bill amounts to further punishing women who have been victims of sexual assault who require an abortion. "No woman plans to have an abortion and certainly no one can plan to be raped, no woman can plan to be sexually assaulted by someone she knows in her own family," Garcia said. In essence, HB 214 mandates women must buy "rape insurance" if they're worried about becoming pregnant against their will.

In addition to its cruel treatment of sexual assault victims, HB 214 could be a literal death sentence for women who can't afford to pay the full cost of an abortion. According to a recent report by Glamour, abortions can cost anywhere from $300 for the abortion pill to as much as $3,000 for a surgical abortion.

But, as The Austin Chronicle notes, it could cost as much as $64,000, as one couple discovered when their child had a chromosomal abnormality incompatible with life at 21 weeks pregnancy — which meant the woman had to have an abortion and a 7-day stint in the ICU. Thankfully, the couple's health insurance covered both the procedure and the hospital stay, but had this happened after HB 214 takes effect in December, they would have had to foot the entire bill.

Thanks to Abbott's signature, some women in Texas will now be forced to carry pregnancies because abortion has been made unobtainable for them. But hey, they shouldn't have to worry: It's not like Texas has the highest maternal mortality rate in the developed world — oh... about that.

It remains to be seen if Texas' new anti-abortion law can or will be challenged in court.