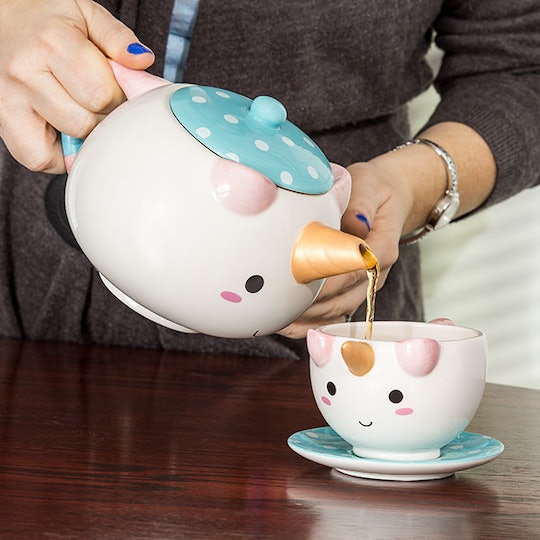 OMG, This Adorable Unicorn Tea Set Is The Perfect Thing For Princess Parties

Move over Mrs. Potts, a new magical teapot is in town. Unicorns are all the rage right now from birthday cakes to unicorn horn shaped battery operated "massage wands," but if you ask this tea-loving lady, there has yet to be a more magical unicorn iteration that the latest from ThinkGeek, this new Unicorn teapot and teacup set by Elodie.

The porcelain set retails for $40 on their website, and features a gold horned pour spout, delicate china unicorn cup, and fancifully decorated saucer. It's actually a part of their Elodie unicorn line that includes mugs, a ramen bowl, and the uber adorable unicorn humidifier. Is it unicorn saturation? That's a trick question. No such thing exists. (Although, I haven't tried the battery operated massage wand, so I can't be 100 percent sure.) All I know is that I may be in my mid-30s, but I still love all that glitters, sparkles, poops rainbows, and whose blood feeds the soul of the Dark Lord. Besides, you actually pour your tea out of the horn of this unicorn. You guys, how much more magical can it get?

I'm not alone with my love of all things whimsy and rainbow-colored. It seems like the past few years have been completely overwhelmed by all that is unicorn. I can only posit that we're searching for something with a little bit of magic and an air of joyful play to offset some of the harsh realities of life. (And we just really want cute teapots.)

Fun fact: did you know that the national animal of Scotland is the unicorn? True story. It's actually on the crest of Scotland. I bet you didn't even know you could have a mythological creature representing a country. (OK, Scotland is technically a part of the United Kingdom, but don't tell William Wallace that, he'd be very put off about it.) I'd like to know why Ben Franklin and his founding father buddies didn't think to themselves, "You know what? The eagle is cool and all. Great hunter, groovy hairdo, but why not the gryphon or pegasus? Why not the mighty Lake Erie monster, Bessie?" Early Americans — no sense of whimsy whatsoever. Unless you're counting the funny powdered wigs.

You don't need to be Scottish to enjoy a hot cuppa from the new unicorn teapot from ThinkGeek though. But I might suggest drinking a strong Scottish breakfast brew to pay homage to their national treasure. Perhaps the magic of the pot will contribute a bit more to the hyper caffeinated tea leaves, and leave you mystically refreshed after a long night with a toddler's foot in your face or a baby stuck to your boobs all night.

Perhaps we don't need to go to Voldemort-level extremes with our love of unicorns. We could use this new unicorn teapot from ThinkGeek to brew up another bit of our own lifesaving potion — green tea. Because according to Reader's Digest, "In a study of 472 women with breast cancer, those who drank the most green tea experienced the least spread of the disease. Researchers also found that women in the early stages of breast cancer who drank at least five cups of green tea every day during their diagnoses were less likely to have the disease recur after the completed treatment."

I am what's referred to as a "heavy tea drinker." To drink a mere five cups of green tea per day is nothing. Sure, there's a chance I'll pee myself. I have had two children after all, but if that's the unicorn horn I must fall upon for my health, I'll do it. Honestly though, I really just want to get some of the mugs and this teapot and have a hilariously good time having a spot of tea with my daughter and son. Tea parties are so much more entertaining when the vessel is magic, don't you think?