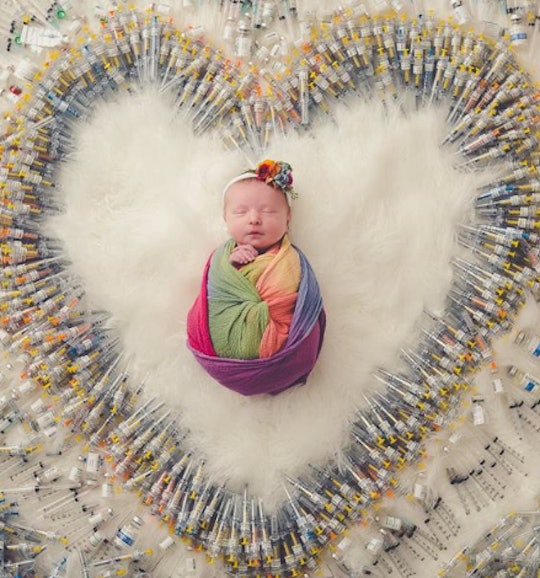 This Newborn Surrounded By 1,616 IVF Needles In This Viral Photo Is The Picture Of Love

It's so easy to look at a newborn baby and think you know the story of how they came to be in this world. That their parents just decided they wanted a baby, got pregnant, and welcomed their child in the easiest, most natural way possible. Of course deep down we know this is not always true. But sometimes... sometimes perhaps a reminder of just how much determination and love went into the creation of a little person. That's why this viral photo of a newborn surrounded by 1,616 IVF needles has touched so many people. It is a stark, beautiful reminder of just how much work, love, heartbreak, and loss went into this baby.

Little London was born to parents Patricia and Kimberly O'Neill just last month. And much like so many new parents in the world, the couple from Arizona took their 2-week-old baby to a local photographer to have some keepsake portraits taken. Only in this case, London's parents wanted something special. As photographer Sarah Packer explained to Romper via email; "The family came to me for a newborn session and asked if I could incorporate the IVF needles somehow. They gave me creative freedom and I knew I wanted to do something special that would be artistic as well as sentimental."

Patricia O'Neill told Romper via email that it was Kimberly's brilliant idea to save the 1,616 IVF needles, "Kimberly actually had the idea that at the end of this we will save each needle used to get to the end of our journey in a photo as proof that we can overcome anything together if we can overcome infertility."

Their journey was about more than the IVF needles, of course. As Packer shared in her Facebook post:

This is the first time I have been asked to do a photo like this! I was honored and wanted to create something special!Mom said, "4 years, 7 attempts, 3 miscarriages and 1,616 shots."

Patricia O'Neill, who has a 7-year-old daughter from a previous relationship, told CNN that she and Kimberly (who has a 14-year-old son) began trying to conceive in 2014. The couple decided that Patricia would carry their baby, and they made some assumptions about what their fertility story might look like, as Patricia told CNN:

We just thought it would only take going into a fertility clinic and nine months later, we'd have a baby. It just didn't happen like that for us.

Unfortunately it was not that simple. The couple kept trying over the course of several years, experiencing three miscarriages along the way. When they miscarried their last child, a son, at 11 weeks, Patricia admitted to TIME that she was close to losing hope:

I was done and I couldn't do it anymore. But my wife and I, we started this journey together, and we decided we would always be together in the hard decisions and she wasn't done.

While the couple were clearly overjoyed to welcome their baby girl, they wanted to pay some respect to the long, painful, arduous history behind how she arrived. Four years, $40,000, 1,616 IVF needles (all saved by Kimberly), seven attempts, three miscarriages. A story worth telling.

Clearly, the internet agrees. In the 11 days since Sarah Packer shared her photo on her Facebook page Packer Family Photography, the photo has been liked more 85,000 times. And Packer told Romper that she has been truly touched by the overwhelmingly positive response people have had:

It's been amazing that it is touch so many people, I definitely knew it was going to be a very special photo for the family but I had no idea it was resonate with so many others and their journey.

As for the O'Neill family; they couldn't be happier with the outcome. As Patricia told Romper:

Samantha Packer is a true artist and she absolutely nailed not only the photo documenting our journey to London but the newborn session as a whole we are in love and awe with every photo she captured. We love that the needle photo is giving so much hope to other families that are still in their journey to a baby.

This is the sort of story that I hope gives people struggling with fertility issues the strength to persevere. A little light at the end of the tunnel. And perhaps it will remind everyone else that not everyone's journey looks the same. So let's honor that.