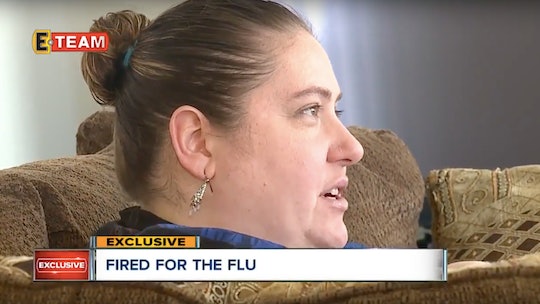 Any doctor will tell you that one of the most effective ways to prevent the spread of illness is to stay the heck away from people when you're sick. When you sequester yourself inside your home, you keep your germs from infecting other people — and thus, stopping the flu or cold in its tracks (well, hopefully). You'd think, then, that anyone who heeds that advice would be commended, considering that so many people don't. Yet, this nurse was reportedly fired for staying home with the flu, and honestly, I don't even know what to think anymore.

The story goes like this, according to the New York Daily News: Theresa Puckett, a temporary nurse at University Hospitals in Northeastern Ohio, called out sick once at the end of last year because she was fighting the flu. She soon returned to work, but, because she was still ill, her supervisor told her to go home. The hospital reportedly considered that another sick day.

Under UH's attendance policy, fill-in nurses, known as PRNs, could be terminated for taking two non-approved absences over a two-month period, according to local ABC News affiliate News 5 Cleveland. Puckett's two sick days opened up her up to dismissal in January. Romper's request for comment from University Hospitals regarding Puckett's reported termination was not immediately returned.

A spokesperson for University Hospitals told the local news outlet that it has a "no-fault" attendance policy in place, which means that "notes from a physician do not 'excuse' an occurrence of absence." Instead, only four types of absences are allowed under this "no-fault" policy: Jury duty or bereavement leave, scheduled paid time-off, approved leaves of absence, and workplace illness or injuries, according to News 5 Cleveland.

In an ironic twist, University Hospitals posted a message to its Facebook page after Puckett's firing urging sick visitors to stay home, according to the New York Daily News. The hospital wrote that it was "restricting anyone younger than 18, or anyone, regardless of age, who exhibits flu-like symptoms" from visiting the facility "for the safety of our patients, staff, and the public."

Funny enough, Puckett told News 5 Cleveland that she had gone to work while sick before because she feared getting fired due to UH's attendance policy. She said the policy and her firing is indicative of a "nursing and hospital culture" that demands hospitals be staffed at all times, "no matter what the consequences," according to News 5 Cleveland.

This is not the first time University Hospitals has come under fire for its "no-fault" attendance policy. In 1996, a former employee filed a lawsuit against the hospital system for wrongful termination "due to an illness-related absence," according to online court documents. The plaintiff claimed she stayed home because she was "in a contagious state, thereby posing a serious health risk." She, however, did not win her case, nor her appeal, in part because of the attendance policy it has in place.

Of course, employment policies are important for structure and stability, and should be followed by everyone. But there also comes a certain point where an organization needs to revisit its policies to see if it serves the best interest of everyone. To fire a person for staying home because they're sick is questionable, especially when the institution is a hospital tasked with keeping everyone healthy. After all, 2018 has been one of the worst flu seasons in recent years, with a number of states experiencing deadly outbreaks.