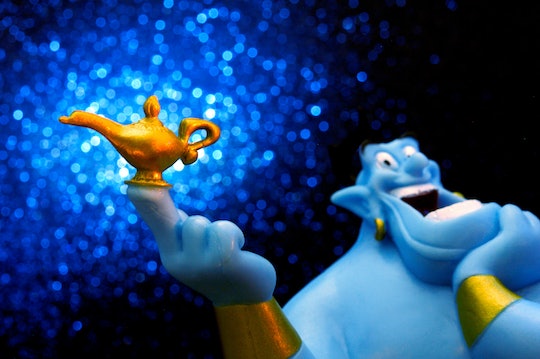 This One 'Aladdin'-Inspired Poll Question Proves Islamophobia Is Too Prominent In The U.S. Right Now

A new poll by Public Policy Polling found that 30 percent of Republicans are in favor of bombing Agrabah, a fictional city in Aladdin, according to Mashable. Yep, if Republicnas had the chance, they'd take out the home of Aladdin, the Genie, Jasmine, and Jasmine's tiger and also the perfect place to go on romantic magic carpet rides. The question wasn't even worded in a way that made Agrabah sound like a place that ought to be bombed (and that's assuming there are such places).

Ever since 9/11, there's been anti-Muslim sentiments among many Americans and those sentiments have only spread since the Nov. 13 Paris terror attacks. Think Progress reported that, since the attacks, there have been 42 violent attacks, threats, assaults, protests, and acts of vandalism against Muslims in the U.S. Further, an entire county of schools in Virginia shut down Friday after a teacher in a world geography class assigned the students an assignment on Islam. It seems safe to say that anti-Muslim sentiment is hitting a high point.

Though the Agrabah question is pretty entertaining, the rest of the questions revealed serious problems. Another question found that 54 percent of Republicans polled supported banning Muslims from the U.S. and 46 percent of those polled said they supported a national database of Muslims in the U.S.

Still, those weren't the worst numbers. A shocking 26 percent of those polled — more than a quarter — said Islam should be illegal in the United States, according to the poll. And 28 percent supported shutting down mosques.

In typical Internet fashion, users were quick to respond. Some were stunned, while others had a sense of humor about it.

Democrats, aren't off the hook other. In a tweet, Public Policy Polling announced that Democrats were only slightly less in favor of bombing Aladdin's city, with 19 percent in favor. But to be fair, many voters on both parties weren't sure.

Clearly, the poll results shows anti-Muslim sentiment among Republicans needs to be taken more seriously. It's troubling, to say the least, to realize some voters are quick to support the bombing of a place they're not even sure exists just because it sounds like a place inhabited by Muslims.

More Like This
What Exactly Are Minions, Anyway ?
Family Of Grandfather Killed In Highland Park Mass Shooting Say He "Saved" Their Lives
Megan Fox Explains Why She Asked Machine Gun Kelly If He Was Breastfed As A Baby
Victoria Beckham Reflects On Being Forced To Weigh Herself On TV After Giving Birth