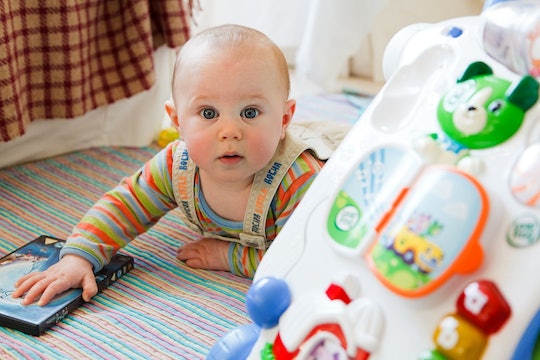 This One Brain Chemical Could Affect How Your Baby Bonds

There is nothing quite like the feeling a parent gets, looking down at their sleeping baby and feeling that particular pull of parental love. That bond, that inexplicable, powerful impetus behind nearly everything you do these days. Because you love your baby, and the connection between the two of you is probably one of the greatest mysteries in the world. Well, to everyone other than scientists, probably. A recent scientific study looked at this one brain chemical that could affect the way you and your baby bond.

According to a recent study conducted by Northeastern University psychology professor Lisa Feldman Barrett, the neurotransmitter (or brain chemical) dopamine could be the secret ingredient behind the human bonding experience from a baby's perspective. Barrett looked at 19 mother-infant pairings to study the way they interacted with each other and establish their level of connection. Using two different types of brain scans performed simultaneously; a functional magnetic resonance imaging, (fMRI), and positron emission tomography, (PET) the research team focused their attention on the brain chemical dopamine, which is the chemical generally associated with the brain's motivation behind striving for a reward.

Researchers noted increased levels in dopamine in mothers who were "more synchronous" with their babies. These mothers also showed an increased dopamine response when viewing babies at play who were not their own.

Barrett, who lead the study and authored the upcoming book How Emotions Are Made: The Secret Life Of The Brain, told News@Northeastern:

Infants are completely dependent on their caregivers. Whether they get enough to eat, the right kind of nutrients, whether they're kept warm or cool enough, whether they're hugged enough and get enough social attention, all these things are important to normal brain development. Our study shows clearly that a biological process in one person's brain, the mother's, is linked to behavior that gives the child the social input that will help wire his or her brain normally. That means parents' ability to keep their infants cared for leads to optimal brain development, which over the years results in better adult health and greater productivity.

So what does this study mean for human development? As Barrett told News@Northeastern, the "cautious" link between dopamine and human bonding could point to the benefit of a positive social reward system as a potent antidote for mental illness.

We found that social affiliation is a potent stimulator of dopamine. This link implies that strong social relationships have the potential to improve your outcome if you have a disease, such as depression, where dopamine is compromised. We already know that people deal with illness better when they have a strong social network. What our study suggests is that caring for others, not just receiving caring, may have the ability to increase your dopamine levels.

In other words... we all want to feel as though we're needed. And the love we receive in return for caring for others might trigger our reward neurotransmitter. Which means the mother-baby bond is a win-win all around.