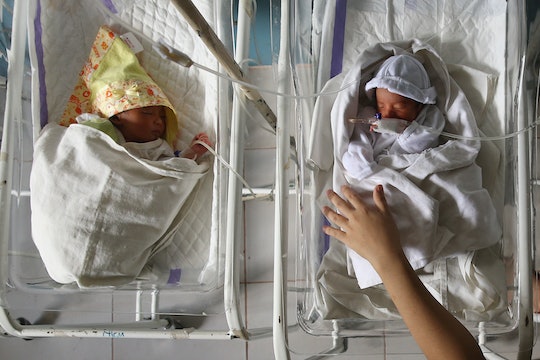 There are likely a ton of factors that cause a person to be left or right handed, many of them hereditary. But a new study found that low birth weight might be linked to left handedness, so you can predict your kid's dominant hand early on. The research was published in the journal Proceedings of the National Academy of Sciences of the United States of America and is based on previous research showing a possible link between very low birth weights and left handedness.

Researchers studied over 2,000 babies, all triplets, from the Netherlands and Japan. Kauko Heikkilä, from the University of Finland and one of the lead researchers on the study, told Global News that they decided to focus on triplets because other studies had found that left-handedness was more common in twins than individual children.

They scoured data sets for triplets born at 33 weeks and found that the lower the birth weight was, the likelier the kid was going to be left-handed. In the Netherlands, the birth weight was 1.79 kg on average for lefties and 1.9 for righties, and the results for the Japanese babies were similar, although on average a little lower overall.

The age of the mother and the birth order of the babies didn't seem to cause any noticeable differences, although the researchers found that babies born left-handed were slower to reach major developmental milestones such as sitting, crawling, and standing. But that could very well be due to the baby's low birth weight and not have anything to do with what hand they're using to prop themselves up.

Of course, the researchers noted, there's not a direct cause and effect link between birth weight and what hand a kid ends up using more. There are hereditary reasons, like the fact that most left-handed people end up having left-handed kids. Overall, about 10 percent of the population is left-handed, and there's not research yet that shows all of them had a lower birth rate than their right-handed counterparts. Triplets also tend to have lower birth weights overall than other babies, so the results could also be related to that.

According to Heikkilä, a fetus develops a hand preference in the womb, sometimes as early as at 10 weeks gestation. Some fetuses have been spotted sucking a thumb at 15 weeks on an ultrasound, too. He added in a statement to Global News that there's still a lot of research to be done regarding handedness. "At best we may only hope that triplets, and our finding, will in future help understand the origins of handedness better," Heikkilä added.

It is not easy being left-handed at all. According to the Smithsonian, two thirds of the world still stigmatizes lefties. China, for example, boasts that just one percent of their population is left-handed, which is statistically odd. A 2013 study looked into why there are "no lefties in China," and it appears that people there are switching their dominant hand because of stigma (and also because a lot of Chinese characters require a right hand to write correctly.

A 1969 Time article explained that lefties just weren't to be trusted. The nation's most read magazine wrote:

In the Middle Ages, for instance, the left-hander lived in danger of being accused of practicing witchcraft. The Devil himself was considered a southpaw, and he and other evil spirits were always conjured up by left-handed gestures.

The word "sinister" is actually linked to the Latin word for "left." It wasn't until someone noticed that there weren't a lot of products for left-handed people, such as sporting goods, writing utensils, and the like, that being a leftie started to gain in popularity.

Now, fortunately, we know that being left-handed has nothing to do with someone's intellect, personality, or overall value. At the end of the day, as long as their birth weight ends up being healthy eventually, who cares what hand they use?