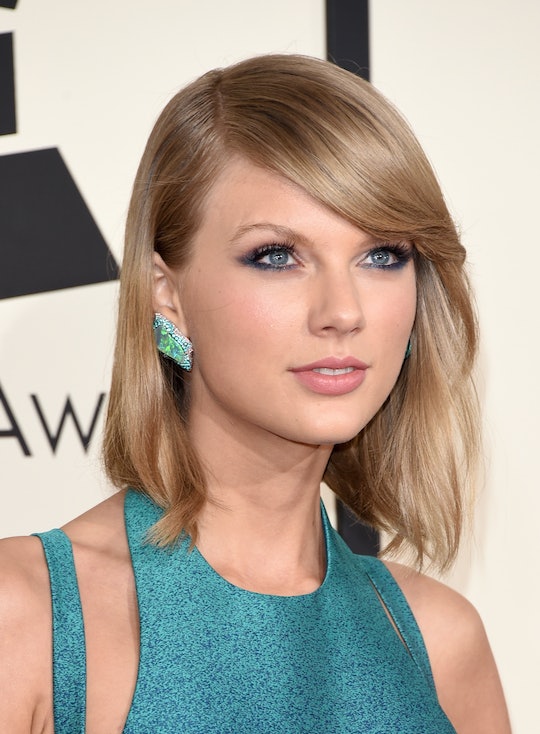 For the past year or so, Taylor Swift has been staying out of the public eye, laying low and emerging now and again only to compliment her friends' latest endeavors. However, now that her sexual assault case — resulting from an alleged incident that took place in 2013 — is in court, the 1989 star is back in headlines. And whether you love Swift, hate her, or frankly don't know who she is (you little lying hipster, you), there's one line from Taylor Swift's testimony that needs to be required reading for society at large.

First, however, some background information. In 2013, Swift attended a fan meet-and-greet at the Pepsi Center in Denver, Colorado. A Colorado DJ and host of 98.5 KYGO, David Mueller, was invited backstage for a photo with the singer. Swift alleges that, during her photo with Mueller and his girlfriend, the DJ put his hand up her skirt and groped her. Mueller was fired soon after the incident and decided to sue Swift for at least $3 million in reparations, denying the groping and claiming that her allegations led to his job loss. Swift countersued with a sexual assault claim for $1. Yes, you read that right: one dollar. Mueller's representative did not respond to Romper's request for comment, but Mueller denies all of Swift's allegations.

Fast-forward to 2017, and this is all playing out in court (and headlines) now.

As events unfolded in court, Mueller's lawyer — Gabe McFarland — called on Swift to answer some questions. While Swift's answers were particularly quick throughout her entire testimony, her response to one question in particular deserves extra attention. When McFarland asked her how she felt when Mueller was fired from his job, according to Slate, she said:

I am not going to allow your client to make me feel like it is any way my fault, because it isn’t. ... I am being blamed for the unfortunate events of his life that are a product of his decisions and not mine.

It's stated so well that I want it written on walls everywhere, in big black letters, to serve as a reminder to sexual assault survivors. Because so often, when it comes to incidents of sexual assault and harassment, the narrative somehow becomes: "This incident derailed this promising young man's life."

I understand that people are innocent until proven guilty, and not wanting to condemn a person's future on allegations alone. (Keep in mind, however, that the idea of rampant false sexual assault allegations is more fiction than it is fact — a decade-long study found that only 2 to 10 percent of allegations were false.) Not wanting to wrongfully accuse someone and destroy their future is a good thing, and that's why the justice system exists.

However, this "girl ruins boy's promising future" narrative occurs even in cases where the evidence of assault is overwhelming. For instance, think of Brock Turner's sexual assault trial last year, when a judge ruled that the otherwise super-promising young swimmer should only get a short six months in jail because "a prison sentence would have a severe impact on him." Or think back to 2013, when two high school football players were convicted of raping a fellow student and a reporter said it was "incredibly difficult ... to watch what happened as these two young men that had such promising futures, star football players, very good students, literally watched as they believed their lives fell apart."

That kind of response puts the blame on a victim of a sexual assault for "ruining" an attacker's life by coming forward. Saying that harassment or assault charges have derailed a person's life simply isn't accurate. It makes it seem like allegations and convictions just magically spring up out of nowhere to ruin someone's future, rather than being the product of their own actions.

So kudos to Swift for calling out victim blaming in sexual assault cases. Nobody should feel guilty for coming forward with their stories of assault, and it's about time we stopped treating victims as if they should feel responsible for the decisions of the people who assaulted them.