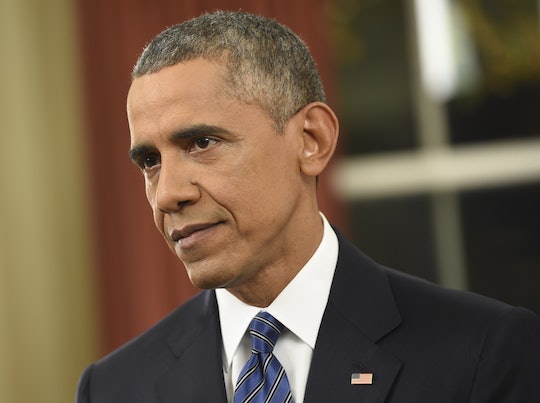 In the wake of the attacks on Paris Nov. 13, the mass shooting at a San Bernardino social services center last week, and hundreds of other mass shootings and terrorist attacks this year, President Obama delivered a rare Oval Office address Sunday night outlining what the U.S. is doing to fight terrorism and also what Americans shouldn't do amid what feels like an epidemic of mass violence. The address was filled with practical bullet points, but one quote from Obama's Oval Office speech got at a larger truth with all of the eloquence we've come to expect from one of the presidency's most eloquent orators.

As the transcript of Obama's speech reveals, much of the president's address was spent delivering facts — there is no evidence that the San Bernardino attacks were directed by an overseas terrorist organization, for one — and outlining a multifaceted U.S. strategy for preventing terrorist attacks abroad and at home. The second and more compelling half of the speech focused on what Americans shouldn't do right now, and it was this part of the speech that yielded one of the most compelling statements of the night, the single quote from Obama's Oval Office address that captured the risks of the Islamaphobia that has arisen in the wake of recent acts of terror.

Alluding to GOP presidential candidate and Senator Ted Cruz's suggestion that we allow only Christian Syrian refugees to enter the U.S., Obama said:

When innocent civilians are being murdered in nightclubs and workplaces in the name of a certain faith, it's all too easy to decide that there is an Us and a Them, drawn along religious lines. If we do that, though — if the United States were to begin denying members of any faith access to things other Americans are afforded simply on the basis of their religion — we hurt ourselves far more than we hurt anyone wishing to do us harm. As Obama mentioned earlier in his speech, that "us" includes "millions of patriotic Muslim Americans." When we talk about an American "us," that "us" necessarily includes Muslim citizens as much as it includes any Baptist or atheist or Jain.

It's all too easy to forget that America was founded by people who were being treated like second-class citizens or worse on the basis of their religion. The right to practice one's religion openly without recrimination is our number one founding principle, which is why it's the first amendment to the U.S. Constitution. Pursuing a plan like Cruz's means America is no longer American, which is what Obama was getting at. If we go that route, we throw away the entire value system we're supposedly defending. If we go that route, there's actually no "us" anymore, no America to defend, and the terrorists have succeeded in propelling us to destroy our own foundation. We can't afford that.