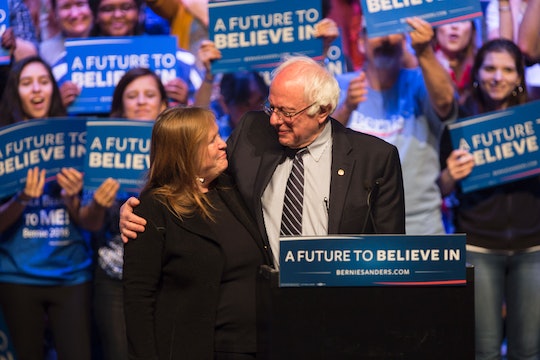 Vermont Sen. Bernie Sanders has been getting a lot of flak for recently "shushing" former Secretary of State Hillary Clinton during a debate and coming off a little sexist. But this one quote from Bernie Sanders might tell us everything about his stance on women's rights. During a February Democratic Town Hall on CNN, Anderson Cooper asked Sanders how his wife would describe him just one word. He took a minute and then turned to the audience where his wife was sitting. "Tell 'em Jane," he said.

I don't think you have to feel the Bern to find that response feminist. Instead of just guessing that his wife might think he embodied a trait, he recognized her presence and let her answer for herself. Jane Sanders seemed a little surprised to have the camera turned unexpectedly towards her (or was that just great production value from the cable news network?). Without missing a beat though, she answered with the word "integrity." Cooper thought he heard her say "anti-greed" and asked her to clarify. She repeated, louder: integrity.

Get a room, Bernie and Jane. Of course, it's 2016 and no one should be shocked that a woman might not want words put it in her mouth or have her husband speak for her. But his response moved a few viewers that night.

It was a really personal, genuine kind of response to a fluff question he could have used to just keep stumping. It seems unfair to call a man who instinctively wanted his wife to answer for herself a sexist. For some, a small move like that might be too little for Sanders and his reputation among women voters. Throughout his campaign, the media has questioned whether he really cares about women. He might have allowed his wife to speak up, but often shuts his female opponent down. But that seems to be more about trying to be heard during the debates. When Sanders interrupts Clinton, it's often been after she's interrupted him during his time to answer a question. In instances like that, it just feels like an easy out to call him sexist.

Then again, in November, Sanders said that Clinton should stop "shouting" about gun violence. Clinton took that to heart and spoke for many women who are used to making themselves small in rooms full of men. She said, "I’ve been told to stop, and I quote, ‘shouting’ about gun violence. Well, first of all, I’m not shouting. It’s just [that] when women talk, some people think we’re shouting.”

Still, Sanders' record has it's definite bright spots. One only has to look at Sanders' voting record to see that he's backed a lot of legislation in the name of women's rights. He even co-sponsored the Paycheck Fairness Act, Violence Against Women Reauthorization Act of 2013, and the Protect Women's Health From Corporate Interference Act of 2014.

That Sanders doesn't talk about gender equality speaks more to his platform than possibly misogyny. Sanders is campaigning on economic equality overall. His idea is that if the playing field is even for everyone, then everyone, including women, will benefit. Logically, that's a pretty sound stance to take. Of course, that Hillary Clinton could be the first female president of the United States that would be a very big, historic step in the fight for women's rights. But if she gets there just by smearing Sanders as a sexist, that's not something any woman should be proud of.

If his voting record doesn't convince voters he cares about gender equality, the respect he shows his spouse should. There's something to be said about the company one keeps. If Bernie didn't care about women, Jane Sanders doesn't seem like the type to stick around. It looks like equality and mutual respect are very much alive and well in the Sanders' household — which should tell you all you need to know.