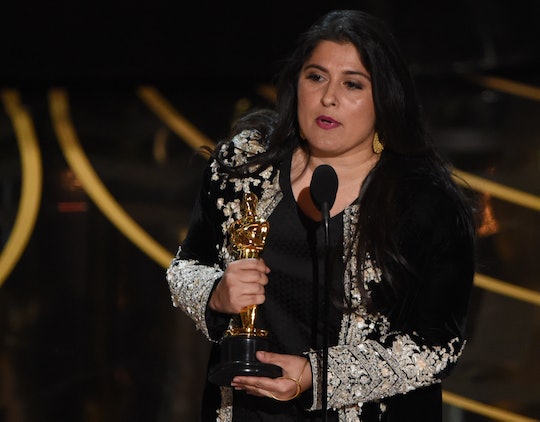 At the 88th Annual Academy Awards on Sunday, the HBO Documentary Films A Girl In the River: The Price of Forgiveness took home the award for Best Documentary Short. Filmmaker Sharmeen Obaid-Chinoy took the stage and gave a powerful acceptance speech both thanking the Academy for giving the issue of Pakistani honor killings of women a much needed platform and spotlight, but also celebrating the accomplishments of women in filmmaking. Sharmeen Obaid-Chinoy proved an important point, saying, "This is what happens when determined women get together." This is Obaid-Chinoy's second Oscar win: She won an Oscar in 2012 for Saving Face, a documentary about acid attacks on women in Pakistan.

Obaid-Chinoy's remark not only celebrated women in filmmaking, but also addressed the importance of having more women making films in Hollywood. When women come together and create, they have the ability to make powerful, moving, important, Oscar-worthy — and Oscar-winning — films. It was an important statement at an Oscars night filled with statement-making moments, from host Chris Rock's no-holds-barred take on #OscarsSoWhite to Lady Gaga's deeply moving performance of "'Til It Happens To You." The 37-year-old filmmaker's remarks weren't the only feminist moment of the evening — Rock also pointed out the absurdity of separate men's and women's Oscars' categories in his opening monologue.

To date, only one woman has ever taken home the Academy Award for Best Director (Kathryn Bigelow for The Hurt Locker in 2009), and only three other women have ever even been nominated for the achievement in the history of the Oscars. With as much of the need for increased representation of minorities and people of color in Hollywood — along with Oscars recognition — it is equally as necessary to have more women making films and getting the recognition they deserve, too. Obaid-Chinoy's win is just as important as what she had to say in her acceptance speech.

Another important point to consider from Obaid-Chinoy's remark: Many films that take on issues important to or directly affect women and girls are made by women filmmakers. I would argue it comes from a certain level of understand and empathy we have for these issues; that said, the burden of taking these issues to task in film shouldn't be left solely to women. Yes, Hollywood has a diversity problem, but it's not just about diversity of who's on the screen — it's about a diversity of issues and the people behind the scenes making those films happen.