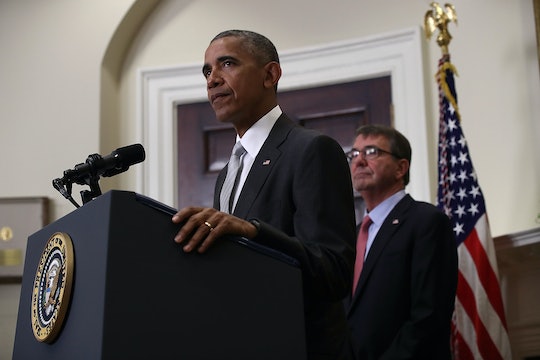 Alton Sterling matters. Philando Castile matters. And if anyone was wondering if their deaths at the hands of police officers within 48 hours of each other would make any sort of impact, wonder no more. President Obama spoke at a live press conference in Warsaw,Poland on Thursday about the recent shootings and the need to create change in the way some police jurisdictions are conducting themselves. While his overall message was thoughtful and clear, it was this one quote from Obama that perfectly summed up the frustration people are feeling about the way some police officers are treating people of color.

Anton Sterling was shot outside a Baton Rouge, Louisiana convenience store on Tuesday where he was selling CD's. Despite the fact that he was on the ground and unable to move, police were caught on video fatally shooting him multiple times. On Wednesday, as protests and vigils were still being organized for Sterling's death, Philando Castile was shot four times and killed in St. Paul, Minnesota when he was pulled over by police for a broken taillight. Castile's girlfriend, Diamond Reynolds, live streamed the aftermath of his shooting on Facebook, and the video went viral almost instantly. The shootings were unrelated, states apart. Which made the horrifying similarities so much worse.

President Obama addressed the two shootings in Warsaw on Thursday after having already released a statement that cautioned, "All Americans should be deeply troubled."

In his speech on Thursday, Obama spoke to the racial profiling and police brutality evident in both videos;

Because of the color of their skin they are not being treated the same. And that hurts. And that should trouble all of us. This is not just a black issue. It’s not just a Hispanic issue. This is an American issue. This is something we should all care about. All fair-minded people should be concerned.

Obama was careful not to make the shootings an"either or" situation, where people either support people of color or support police. As he said, the overwhelming majority of police do their job without regard for race. "Black lives matter does not mean that blue lives don't matter." It's not about comparing the value of lives. Obama pointed out that those officers who work hard and protect people in a fair way should encourage their leadership to follow suit. And while he acknowledged that some things have gotten better, he was adamant that it is still not enough. "Change has been too slow, and people should be feeling a greater sense of urgency about this."

He had a special message specifically for law enforcement officials who might feel as though they are under attack: "We know how tough your job is." He went on to say that, "They’ve got a dangerous job. It is a tough job. And as I've said before, they have a right to go home to their families, just like anyone else."

But the reality is, it's important to recognize that there is a "particular burden being placed" on a specific group of citizens. And as a society, it can no longer be dismissed.

As for those who question the validity of the outrage people are expressing as "political correctness", Obama had another message: "How would you feel if it was your family? It's not political correctness. It's being American, and living up to our highest ideals."

As he finished off his speech, looking tired and frustrated, he ended on a note of hope.

"We can do better. And I believe we will do better."