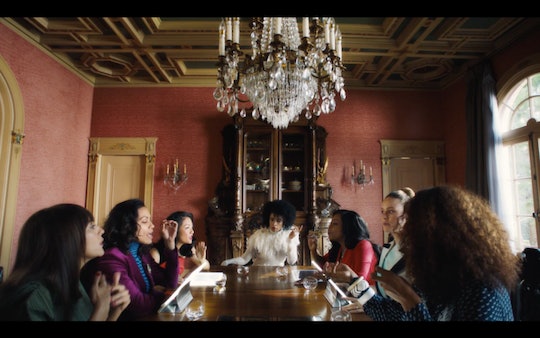 Here’s The Moment Everyone Is Talking About In “Family Feud”

Finally, after much anticipation and hand-writing on Twitter, it's here, as of, yep, 4:44 p.m. EST. And, while there are many reasons to love JAY-Z's newly released "Family Feud" video (not the least of which is the super adorable / majestic Blue Ivy appearance), there's one major aspect that makes this video a fitting send-off to 2017 ... and a super amazing feminist toast to launch into the new year. This one tweet about the women in "Family Feud" totally sums up why the video contains a badass statement of support for the future women have been fighting for all. Year. Long.

Y'all ready for this?

A little way into the video, which is actually an epic and visually stunning mini-film, there's a scene that envisions the government of 2050. Picture this: a roomful of politicians sitting around a table, discussing the most important issues of the day, like abortion, health care, gun control. Do a bunch of old white men in terrible suits spring to your reluctant mind? Yeah, this is nothing like that. And it's nothing like the current White (and I do mean white) House with which we're saddled. No. The future pictured here is instead, very literally, female. And it is gorgeous.

That's right. In JAY-Z's vision of the future (directed by the incomparable and totally brilliant Ava Duvernay), there comes a day where a diverse bunch of (fabulously well-dressed, but that's just decorating on the icing on the cake) women sit down at a table to discuss and take action on the important matters facing society.

Just think of it. Instead of the traditional roomful of old white guys talking about, oh, say, the future of maternity health care under Trump's proposed healthcare bill:

... imagine instead, these people making these decisions:

This isn't the first time that JAY-Z has used his platform to advocate for girls and women. At a his 4:44 Tour stop in Cleveland last November 20, JAY-Z took a moment between songs to address a 9-year-old girl in the audience.

“You can be anything that you want to be in the world,” Beyonce's husband told the little girl. “At this very moment, America is way more sexist than they are racist. But you, young lady, you got the potential to be the next president of the United States. You believe that.”

Twitter sleuths have decided that in fact, in the video, it's a grown-up President Blue Ivy who's at the head of that table of powerful women in the year 2050, and that's a dream I can get behind, too:

But I'm really hopeful that Blue Ivy won't be our first woman president, nor our first WOC president. Though the election of our current President came as a heart-wrenching blow to my hopes for the future, and my daughter's future, I've been inspired and buoyed by the women I see in all walks of life taking action, fighting back, and making change. I'm talking about the millions of women who took to the streets in January; I'm talking about the women who've run for office — and won; and I'm talking about the regular women you and I know who are making phone calls and otherwise getting involved for the first time in their lives.

As the narrator of the video says, as he's explaining to a character played by Jessica Chastain the history of his family's commitment to justice and peace: "The worst of us doesn’t define us.” I believe that, and I believe that a future like the one we see in JAY-Z's video is not just a possibility, it's an inevitability.