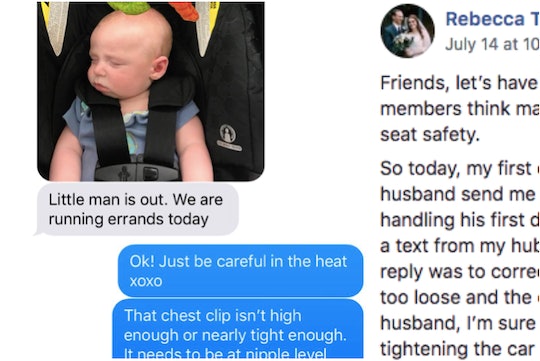 It's safe to say that no parent, or anybody for the matter, out there wants to be a nag. No matter where you might be on your parenting journey, it's never fun when you have to constantly have to get on your partner's case about something. Still, as much as you might loathe badgering your significant other, this "overprotective" mom's viral post about car safety highlights why it's so important to stand your ground on important issues. Although many people might fear coming across as overcritical, being a stickler for safety guidelines could potentially save your child's life.

Rebecca Tafaro Boyer, a mom to 3-month-old son named William, is aware some people might perceive her as "overprotective." In fact, Tafaro Boyer freely admitted this in her viral Facebook post that has garnered over 2,000 likes and 32,000 shares since it was first shared on July 14. "Friends, let’s have a quick chat about something that some of my family members think makes me a super annoying overprotective mom - car seat safety," Tafaro Boyer began her post, an admission that's sure to get the attention of any vigilant parent.

She then launched into a story a lot of parents out there will probably find familiar. Tafaro Boyer — like many new moms — was anxious about going back to work following William's birth, and so she "demanded" her husband send her "hourly updates" about the baby on the day she was set to return, as she shared on Facebook. Everything was going fine until Tafaro Boyer's husband texted her a seemingly cute picture of William strapped in his car seat. To Tafaro Boyer's credit, she immediately noticed William's car seat straps and clip weren't in the correct position. Tafaro Boyer recalled:

My nagging wife reply was to correct William’s position in the car seat - the straps were too loose and the chest clip was way too low. And because I know my husband, I’m sure that he laughed at me and rolled his eyes before tightening the car seat and fixing the chest clip.

Tafaro Boyer's text exchange — that she took a screenshot of for the post -— illustrates her impressive knowledge about car safety. "The chest clip isn't high enough or nearly tight enough," Tafaro Boyer wrote to her husband, according to a photo shared on Facebook. "It needs to be at nipple level."

By the way, it's important to remember here that Tafaro Boyer's husband made an honest mistake, which is completely common for new parents. There's a lot of conflicting information out there about car seat safety, and its always a good idea to seek out a trusted source whenever you're in need of information.

At 2:30 my phone rang, my husband’s panicked voice came through the line, “Honey, we had a car wreck. We are fine, but the car is going to be totaled.” The boys were less than three miles from our house when a woman pulled into oncoming traffic to try and make a quick left turn. David just didn’t have enough time to stop - it could have happened to anyone. He slammed on the brakes at nearly 50 miles an hour before colliding with the front passenger side door of her SUV. My precious little bundle of joy was so well restrained in his car seat, THAT HE DIDN’T EVEN WAKE UP. Even with the impact of the two cars, William only received a minor jolt - so insignificant that he was able to continue on with his nap, and then spend the next two hours flirting with nurses in the Le Bonheur ED. My husband didn’t fare quite as well - his foot is broken in three places, has three dislocated toes, and we go back to the doctor Monday to make sure that he doesn’t need surgery. The car is a loss, but cars can be replaced - my boys can't.

Terrifying, right? I'm just glad everyone is OK and that Tafaro Boyer's husband listened to her correction. It just goes to show why parents should trust their instincts regarding children's safety.

And do y’all know what happens now to the beautiful three month old car seat that protected my little monkey man? It goes STRAIGHT 👏 IN 👏 THE 👏 TRASH 👏 according to the NHTSA (National Highway Traffic Safety Administration) my expensive, barely broken in car seat is now garbage. Any car seat that has been involved in a moderate to severe motor vehicle incident where the car cannot be driven away from the scene of the crash immediately becomes defective. When my husband and I realized it would have to be replaced he turned to me and said, “We are getting the same damn car seat because that thing did his job.” I am more than happy to shell out another $200 to Britax for protecting my baby.

Tafaro Boyer is right about this advice. The National Highway Traffic Safety Administration "recommends that child safety seats and boosters be replaced following a moderate or severe crash in order to ensure a continued high level of crash protection for child passengers," according to Safe Ride 4 Kids.

"Tonight I am on my knees thanking God for watching over my two precious boys, thanking the amazing staff at Le Bonheur Children’s Hospital Emergency Department for checking out my little man so quickly, praising Britax for making an incredibly safe car seat, lamenting the loss of my beloved Volkswagen Jetta, and most of all thanking my husband - who has finally proven that yes indeed he is actually listening when I nag him!," Tafaro Boywer concluded her post.

Although Tafaro Boyer uses the word "nag" to describe her behavior in this situation, I think a better word to use here is confidence. This mom is confident in her car seat knowledge (as she should be) and she stood her ground when it counted. Bravo. Oh, and if you're worried about coming across as a nag, Tafaro Boyer tells Romper in a Facebook message parents shouldn't sweat it.

"I’ve certainly been in a situation where I have noticed a child buckled into a car seat incorrectly and I’ve struggled with the decision of whether or not to talk to their parent," Tafaro Boyer said. "... I think the goal is in the approach - when you walk up to someone and say 'hey! That’s wrong!' They are never going to be receptive to what you have to say, even if it is valuable information that could protect heir child."

Instead, she recommends striking up a conversation with them and asking them about their own little one, but perhaps most importantly, "give them the benefit of the doubt that maybe they don’t know everything about the car seat."

Tafaro Boyer added, "Once you have established a rapport you can slip in something like, 'I noticed that the chest clip is a little low, I used to do the same thing, but then I learned it has to be under my kiddos armpits. Do you mind if I help you fix it?' And you may get told to mind your own business, but 9 times out of 10 I bet you a new parent would want to know information that could protect their baby, as long as you’re not acting holier than thou.'"

Aside from William being safe and sound, one of the best things about this story is what her car seat manufacturer did once the post went viral. Apparently, Britax donated a car seat to a non-profit organization that "assists the families of children with critical or chronic illnesses in meeting their basic every day needs," according to her Facebook post. Additionally, Tafaro Boyer donated their damaged car seat to their local NICU so it can be used to educate other parents on car seat safety.

Talk about a great ending.