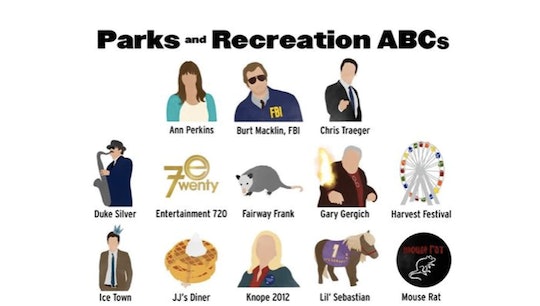 For A Room Cuter Than Lil' Sebastian, Your Baby Needs This 'Parks & Rec' ABCs Print

Many families choose themes suitable for an infant for their child’s nursery — woodland creatures, princesses, Disney, Winnie-the-Pooh, etc. Other parents like to reflect their own interests, like Leslie Knope. For fellow Pawnee citizens, there's a Parks and Recreation ABC print on Etsy, and it's cuter than Lil' Sebastian. For just $15, you can snag an 8x11 print, and for $20, you can purchase an 11x14 print. No matter which one you choose, it's a must-have for any fans of Sweetums, Pawnee, and Fairway Frank.

My husband and I decorated our son’s room with a music theme, complete with a guitar, records, and prints of music lyrics on the walls. But if TV shows are more your thing, the creator of this print has you taken care of. TheNerdseryShop on Etsy is a beautiful, talented, brilliant, powerful muskox, a perfect sunflower, and a rainbow-infused space unicorn all in one. Each letter of the alphabet features something from the show. We of course have Anne Perkins, Burt Macklin — FBI, Chris Traeger, Duke Silver, Entertainment 720, Fairway Frank, and even Gary Gergich is featured with his arm on fire. The Harvest Festival of course makes an appearance, as well as Ice Town (complete with Ben Wyatt wearing the ice crown along with his signature skinny tie), JJ’s Diner, Knope 2012, Lil’ Sebastian, Mouse Rat, NutriYum Bars, and scary Orin. My favorites are probably the Treat Yo’ Self, Uteruses Before Duderuses, and The Worst graphics on the print. I know you read “The Worst” as Jean Ralphio with his hand cupped over his mouth, right?

That's one of my favorite lines. If it's one of yours, too, you should totally pick up this Jean Ralphio onesie that says, "My Diapers Are The Wooorst!" for $13, also on Etsy. You can also prepare your baby girl for success with the Pawnee Goddesses onesie that reads, "I am a goddess, a glorious female warrior." Guys, there's even a Ron Swanson onesie that reads, "Give me all the binkies and bottles you have." And of course a Treat Yo' Self onesie. I can't.

If Parks and Recreation isn’t one of your favorites (“You have five seconds to get out of here or I will rip your throat out”), TheNerdseryShop has other themed prints for your baby’s nursery, including Harry Potter ABCs, Marvel ABCs, DC Comics ABCs, Stranger Things ABCs, Lord of the Rings ABCs, Star Wars ABCs, Indiana Jones ABCs, Jurassic Park ABCs, Game of Thrones ABCs, and my other personal favorite show, The Office ABCs. Y'all, your baby will have the coolest room in town. Trust.

No matter what theme you decide you want your nursery to be, enjoy decorating it. That was the best part of preparing for a baby. It was so much fun and exciting to put my son's room together, knowing the baby kicking me in my bladder would be enjoying this room and hopefully sleeping in it one day. But if Parks and Recreation is your ultimate fave, you can't go wrong with the ABCs print straight from Pawnee.