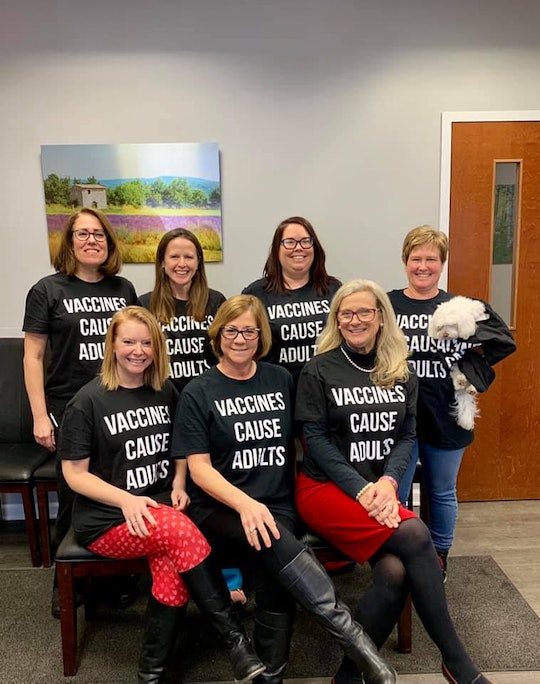 Although vaccines exist to protect people from deadly diseases and medical experts have long rallied against the fear-mongering anti-vaxx messages, outbreaks been happening at an alarming rate. So following a local measles outbreak in New York's Monroe County, staff at Legacy Pediatrics came up with a pretty creative way to make a statement. According to ABC News affiliate 13 WHAM, the pediatric office's t-shirts promoting vaccines offer up a very to-the-point reminder to parents that, while the internet may be full of misinformation about side effects, the reality is actually that "vaccines cause adults."

Physician assistant Kate Shand told the news outlet that she came up with the idea for the t-shirts in response to the often-cited (yet largely debunked) idea that vaccines cause autism in children. What they do offer instead, as Shand noted, is the chance for children to avoid possibly-fatal diseases like the measles, giving them a chance to grow into healthy adults.

So after having the black-and-white shirts printed by local printing company Crazy Dog T-Shirts (who provided the shirts to the clinic for free), Legacy Pediatrics posted a group shot to Facebook of staff proudly showing them off. "Vaccines. Save. Lives," they captioned the photo.

In an email to Romper, Legacy Pediatrics pediatrician Dr. Janet Casey said that the team was "quite surprised" at how much attention the photo has received, and that there's been a lot of support — so much so, in fact, that Crazy Dog T-Shirts is now filling outside orders for them.

But, according to Casey, the post also appeared to be shared within anti-vaxx groups, leading to quite a lot of online backlash. Then again, it's that very rhetoric that led Legacy Pediatrics to create the t-shirts in the first place, since the whole point is to raise awareness that, actually, vaccines really are life-saving.

Casey tells Romper that not only have vaccines been "the most important contributor to childhood health and the reduction in childhood mortality" after modern sanitation, studies "involving hundreds of thousands of children" have already proven the idea that vaccines cause autism to be false.

What is very real though? The risks that low vaccination rates pose to children's health. "The illnesses prevented from vaccines will return, and people will be seriously ill and some will die if people stop vaccinating their children, teens and themselves," Casey tells Romper. "The illnesses did not disappear, they were controlled. At some point, diphtheria and polio will return."

When it comes to the measles specifically, it seems as though that's already happening. Though we may only be two months into 2019, the Centers for Disease Control and Prevention has already confirmed 127 individual cases of measles in 10 states, while outbreaks have been identified in Texas, Washington, and New York.

Concerns over the highly-contagious disease even led officials in Washington to declare a state of emergency in late January, after 36 confirmed cases in the state, the majority of which occurred in unvaccinated children, according to CNN.

Though measles was actually considered to be eliminated in the United States in 2000 thanks to vaccines, according to The Washington Post, it's certainly been making a resurgence in recent years. And though the number of yearly cases between 2000 to 2010 averaged out to be around 60 according to the Mayo Clinic, CDC data from 2011 to 2018 show that that number jumped to over 200.

Common symptoms of the measles include fever, cough, inflamed eyes, and a blotchy skin rash, according to the Mayo Clinic, though complications from the virus can include pneumonia and encephalitis.

Parents who are against vaccines aren't just putting their own children at risk for the measles though, they're also putting infants, immunocompromised individuals, and other vulnerable people at risk as well. And the very real impact of low vaccination rates is why the World Health Organization highlighted "vaccine deniers" as one of this year's "ten threats to global health." In fact, the WHO noted in the report that a whopping 1.5 million deaths could be avoided globally just by improving vaccination rates.

Unfortunately, judging by the comments section on Legacy Pediatrics' viral post, there is still a long way to go: countless Facebook users left messages on the clinic's page insisting that vaccines cause autism along with a variety of other injuries, including death, and criticized the staff as "evil," "insensitive," and even "brainwashed," for speaking out in support of them.

The problem? Medical experts who have dedicated their lives to studying vaccines and vaccine safety say that's just not the case — in fact, the shots children receive today are safer than they've ever been. With so much anti-vaxx rhetoric on social media though, it can be incredibly difficult for well-meaning parents to know what's best. And it's why it's so important that providers like those at Legacy Pediatrics continue to speak out in support of science.

More Like This
New Study Finds Brains Of Teens Who Lived Through The Pandemic Aged Faster
Pinterest Predicts Their Top 2023 Trends In Parenting, Beauty, Fashion, Home, & More
How To Make Santa Footprints
The 35 Top Toys For 3-Year-Olds