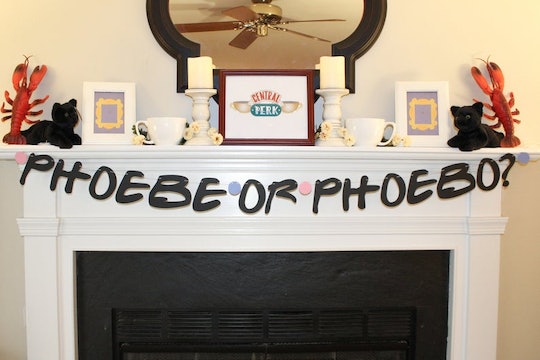 It can be tricky to come up with original, fun decor when putting together a gender reveal party or baby shower. Gender reveal party favors in particular are often pretty uninspired, with lots of blue and pink question marks simply asking "Is it a He or a She?" Which is why this Friends-inspired "Phoebe or Phoebo?" banner is so great.

Every fan of Friends likely recalls the classic exchange between Rachel, Ross, and Phoebe, as they debate the best name for Rachel's unborn child. Rachel really likes the idea of "Rain" or "James" for a girl, while Ross pushes hard for a boy named Darwin. Then, of course, Phoebe helpfully chimes in with her own excellent suggestion of "Phoebe" for a girl, or "Phoebo" for a boy.

Now, parents-to-be may recreate this bit of hilarity with a banner made from card stock and string, written in the same font as the Friends fun logo. The letters are about 4 inches high, and and come with brightly colored dots you can string through for some added color and flare. If one flips through the pics available on Etsy, you can see that hardcore parents can go all out on the whole Friends theme if they so choose, and create a little Central Perk poster flanked by tiny empty-gold-on-purple frames.

The store selling the banner — CraftyCurlsShop — actually has a wide variety of TV-themed banners, many of them featuring the Friends font. There's one announcing a "Friendsgiving," and some personalized ones that riff on the title format of Friends episodes, saying things like: "The One Where Sara Turns 30" or "The One Where Sara Graduates." There's also a few Bachelorette-themed banners reading: "Will you accept this rose?" (I think it's probably a safe bet to say the owner of CraftyCurlShop enjoys television.)

One amusing aspect of the whole Phoebe/Phoebo banner is that it seems to poke a bit of light fun at the whole "gender" reveal idea. I mean, anyone who wants to have a gender reveal party totally should, and there's no denying that it can be fun and exciting to learn the sex of your child. (Depending, of course, on how you personally view gender and gender identity.) But I do encourage parents to keep their gender reveal parties simple, and maybe don't have it involve any guns, explosives, wildfires, or alligators. As The Cut reported, those parties tend to not go so well.

This banner does make me wonder if there are any diehard Lisa Kudrow fans out there who actually went ahead and named their child Phoebo. There appear to be quite a few cats bearing the name, though I couldn't find any actual children. Which is for the best, as the name "Phoebo" isn't, eh, a very strong name, I guess you could say? Rather hilariously, when someone on Twitter posted a meme asking who else out there actually liked the name "Phoeboe" for a child, it appears to have received a total of two likes.