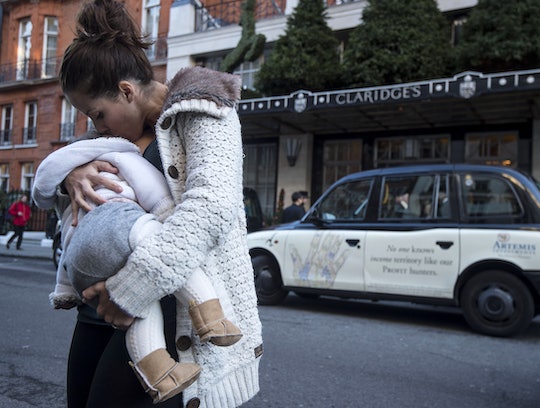 Remember that time a woman was openly breastfeeding her baby in public, sans blanket, and nobody anywhere cared? Yeah, me neither. But we might actually be on our way to that magical place, guys. That mythical Utopia where moms can just feed their kids without hiding, whether it's a granola bar or a turkey leg or their breast. There are signs that the world is subtly shifting, that we humans are evolving to the same place of bland acceptance as farm animals or orangutans. One recent sign that we're taking a step in the right direction? This photo of a mom breastfeeding her baby that went viral, and this mom who was shocked by the attention for all the right reasons.

Naomi Jael Covert is a young mom of 10-month-old baby boy T.J. She lives in Vilseck, Germany. She is an army wife. And she breastfeeds her baby. Publicly, without shame, like its as normal as breathing because oh yeah, it is. She was a guest at a wedding and someone snapped a cute photo of her making goofy faces while she nursed her baby. Big deal, right? Apparently... yes. Covert posted the photo to her Instagram account, and in just a few days it has wracked up over 12000 likes.

Covert told Buzzfeed News that she was shocked by the response, but realizes there are many mothers who are nervous to nurse their babies in public. “I wanted to show that it’s literally no big deal to breastfeed,” she said, “no matter the circumstances.”

“It’s just a breast; that’s what God gave me to use when baby is hungry.”

Covert went on to point out that, in Germany, people are already more comfortable with public breastfeeding.

"Here in Germany people don't get mad about it," Covert wrote in the caption. "It is NORMAL. Nothing rude or bad about it."

The response was almost overwhelmingly positive, with other mothers sharing stories of their own struggle to normalize breastfeeding and fans posting their enthusiastic praise of the breastfeeding mama.

"I want to become an awesome mother just like you seem to be!" wrote one user by the name of vieiriabar. "Happy to know that your picture and attitude helped to make such a difference."

Thats great! Here in Austria it's not such a big thing to breast feed in public, so it is a little bit weird for me to see, how stupid people comment this. Go one, be a wonderful and loving mum.

An Insta-user with the handle kimberyl1624 asked, "️Did any of the other guests cover up and hide under a blanket while they ate??? NO THEY DID NOT!!!! So why should TJ have to!?"

As for any negative comments? Forget about them. Let's simply take a moment to celebrate a small sea change and celebrate a mom openly breastfeeding her son with wit and courage, and perhaps a sly wink to the foolishness of breast shaming. And let's also celebrate the wide, wide world and all of the humans in it who are slowly remembering what breasts are truly for. Food. Period.