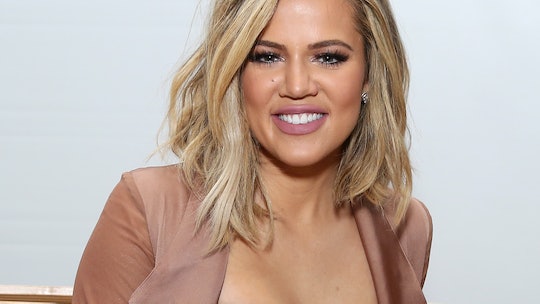 The Kardashian-Jenner clan is known to be a tight-knit family, and nothing has changed with the wave of a new generation. In a recent photo posted on Rob Kardashian's Instagram, Dream Kardashian and True Thompson are pictured together in their adorable beach-ready outfits, and honestly, the two cousins are the cutest thing I've seen all summer long.

Dream — the 2-year-old daughter of Rob and Blac Chyna — and True — the 1-year-old daughter of Tristan Thompson and Khloé Kardashian — spent the day outdoors, playing with water sprinklers, as E! News reported. Khloé also shared a photo of the pair of cousins via her Instagram Stories, and Rob tweeted another sweet pic of his daughter, who was all smiles.

When the pic of True and Dream was shared on Aug. 5, viewers of Keeping Up with the Kardashians were quick to correct Rob's simple caption, which read, "Dream and True️." Instead, fans couldn't help but re-caption the photo: "Dreams come True." And not going to lie, it's perfect.

In the photo, the two cousins stand arm-in-arm like the stylish BFFs they were always destined to be. Dream rocked a sunhat, pink cat-eye sunglasses, and a chic floral swimsuit. Meanwhile, True stood out in a white hat, cherry print suit, and the cutest coral sandals.

It's possible Dream and True's recent outdoor excursion could be inspired by Rob's efforts to stay active and healthy. According to Entertainment Tonight, Rob has reportedly been taking his health seriously for the sake of his daughter. "Rob wants to be around as long as possible for his daughter, Dream, and in doing so, knew he needed to take control of his health," a source told the publication. Entertainment Tonight also reported on the status of Rob's complicated relationship with Blac Chyna, and it sounds like the former couple have planned to put their daughter first. "Rob and Chyna co-parent and are in a good place, but don’t communicate much," the source said. "They want what is best for Dream and that starts with not having any drama."

Regardless of reasoning, there is no surprise Dream and True are hanging out this summer. In the past few months, the two cousins have been frequently seen together. And of course, fans are always prepared for the sweetness overload inspired by the two besties. Back in June, Khloé posted a charming set of pictures featuring Dream bending down to hug and kiss True. "BFF Cousins," Khloé captioned the pic on Instagram.

But if you need more proof about this ride-or-die friendship between Dream and True, look no further. In an interview with Us Weekly's Marc Lupo, Blac Chyna revealed which Kardashian kid Dream liked the most. “I would have to say baby True," the reality star said. When asked why, Blac Chyna responded, "I guess because they're close in age."

Watching Dream and True's friendship blossom through social media has been an absolute treat to see, or rather, a dream come true. And if there's anything I know about this family, it's that there will be more adorable photos to come in the future.