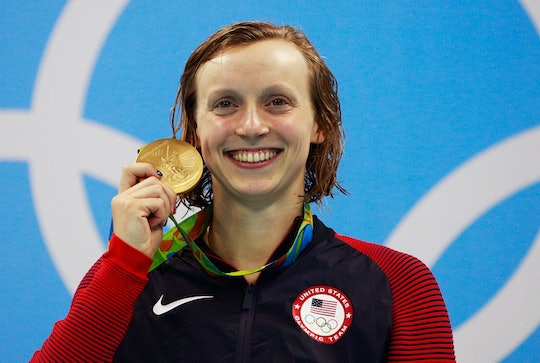 Tuesday was an amazing day for American swimmers at the Olympic Games in Rio. Michael Phelps and Katie LeDecky both won gold medals in their events, while the U.S. swim team took gold in the relay. As Katie LeDecky stood on the podium with her gold medal and her smile and her national pride, I wonder if she took a moment to look back at all. I wonder if she thought back on the journey that brought her to the podium. I wonder if she remembered a photo from 10 years ago, because this photo of Katie LeDecky at 9 years old is a poignant reminder that perseverance and dedication pay off in spades.

Maryland native Katie LeDecky is just 19 years old, and already competing in her second Olympic games. She won a gold medal in the 800-meter freestyle at the 2012 Olympics, and has now won two gold medals at the 2016 Olympics for the 400-meter and 200-meter freestyles respectively. When LeDecky was competing in the 200, she told The New York Times that she pushed herself so hard she felt bile rising in her throat for the final 50 meters of the race.

That was such a tough race. I came pretty close to throwing up the last 50. Everything was hurting. I just had to dig deep. I had no idea whether I had touched first.

With that win, LeDecky is well on her way to being the first swimmer to win the 200-, 400-, and 800-meter freestyle in the same Olympics since Debbie Meyer in 1968, if she can hold on to her title in the 800 this time around. It's a long way to come for this little girl pictured right here.

Talk about coming full circle, right? There she was, a little 9-year-old kid who had already been swimming for three years, meeting the most decorated Olympian of all time, swimmer Michael Phelps (and can I just say, I love his enthusiastic little smile too?). He took the time to pose for a picture and to sign a poster for her. He just... took the time for her in general, which must have meant a great deal to a little girl who had no idea she'd one day be in his place. And now here she is, 10 years later, posing with Phelps again.

And most of all, it makes me think about what it's like to be a little girl, swimming her heart out with no guarantees for the future, standing in line to see what the end result might some day look like for her.

Congratulations, girl. Good on you.