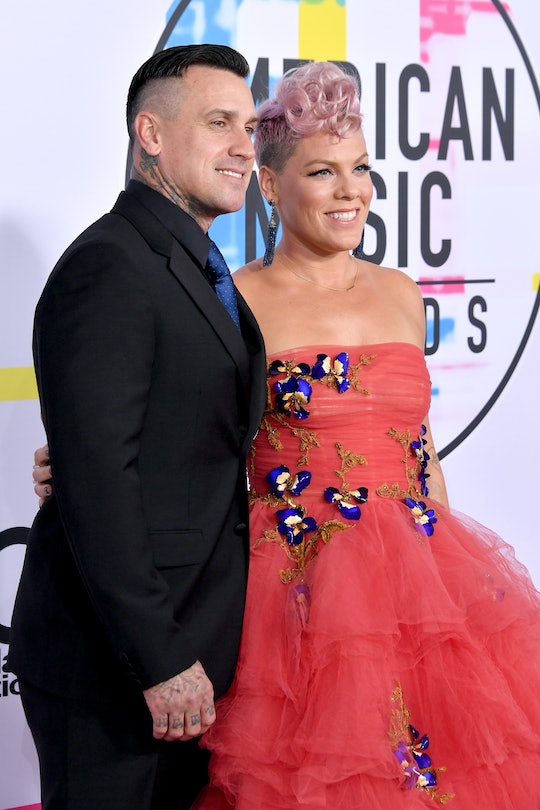 Pink and her entire family are currently traveling all around the world as part of her Beautiful Trauma tour. And let me just tell you, they have not been having the easiest time. The singer was forced to cancel two concerts in Sydney, Australia after being hospitalized for dehydration and a gastric virus. In fact, the entire family has been sick at one point or another, it seems. The latest? Pink's 1-year-old son Jameson. As the singer's husband, Carey Hart, shared on Instagram, Pink's son got hand-foot-and- mouth disease (HFM) while on tour, and the photo he posted of his little boy has caused some backlash.

As he shared on Instagram, Hart took his son out for a little breakfast and decided to share a picture of his rashy little boy with his fans, ostensibly to give his followers a sense of the very real difficulty the couple has had on this recent tour. "Wanna know how glamorous tour can be? Jameson has hand, foot, and mouth; and willow has a 102 temp," he wrote on Instagram. "Both kids laid up and mama @pink still has to push through and do shows."

He continued, "I had Jameson at breakfast yesterday and this vile woman at the table next to us kept staring at him with a sh*tty look on her face. I told her it was bed bugs 😂. #NoRestForTheWicked #LifeInHotels."

For those who have never had to deal with HFM, the Centers for Disease Control and Prevention describes it as a viral illness that tends to affect infants and children under the age of 5, although it has been known to affect adults and older children as well. The virus usually begins with a fever, a smaller appetite, and sore throat. Within a few days of being infected, painful sores can develop in the mouth and a blistering rash breaks out on the skin, according to the CDC. In other words, it's pretty awful.

But it's also highly contagious. According to the CDC, a person with HFM is most contagious in the first week of the illness and people can sometimes remain contagious with HFM "for days or weeks after symptoms go away." As noted by the CDC, the virus can be spread through close physical contact; the air, if the infected person is sneezing or coughing; feces (diaper changes); and touching contaminated surfaces.

And you guessed it, folks — that's why people are not terribly impressed with Carey Hart for seemingly taking his son out in public when he has HFM, because he might have increased the risk of infection to someone else.

However, the tired dad wasn't exactly one to back down from people suggesting he had made a poor parenting decision on Instagram. One follower wrote to Hart, "... hand foot and mouth is very contagious my mom is a preschool teacher. and her teachers aids have to go home if they have it." To which he responded: "What's your point? You think I let my kids eat off of other peoples plates?"

Another comment that got Hart's attention read, "I obligue [sic] myself to not judge other parents, but definitely, if I see an ill baby and only wearing a diaper outside his home/hotel room, I would definitely not be kindly smiling."

"Yeah I took my kid to breakfast only wearing a diaper," Hart responded with a face palm emoji.

To be fair here, I can see why people might have been concerned. He didn't give fans a timeline of Jameson's diagnosis or disclose when the photo was actually taken or when they ate breakfast, so they might have been justifiably worried that he was still contagious. But at the same time, let's give Hart the benefit of the doubt here. He's been a dad for seven years, ever since his daughter Willow was born, and has managed to keep his kids safe. Also, the American Academy of Pediatrics notes that children with HFM are safe to be out in public unless they are feeling unwell or have "many open blisters," and have been given the OK from their doctor.

But for every critic who was calling Hart out for bringing his ill son out to breakfast, there seemed to be plenty of people who were offering him their support. Giving him sympathy for what has clearly been a taxing tour for the entire family, offering tips for helping Jameson to get better, and just offering a voice of reason in general.

You rarely know the full story from one Instagram post, so perhaps we can give this couple a break? Compassion goes a long way.