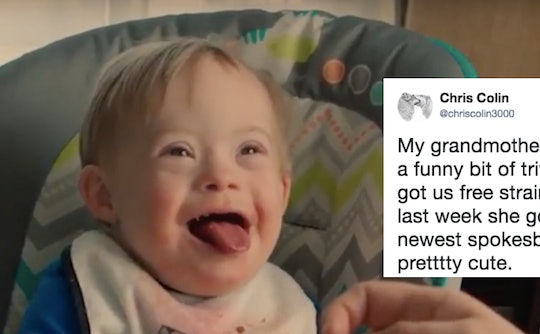 Ann Turner Cook and Lucas Warren may be 90 years apart in age, but they have something pretty huge in common. Cook, 91, was Gerber's very first Gerber baby, and Lucas, 18 months, is the brand's current spokesbaby. (I mean, how cute is the word spokesbaby?) This past weekend, the two Gerber babies met for the first time — and the photos are unbelievably sweet.

Back in 1928, when Cook was a baby, her family submitted a charcoal drawing of her to a contest held by Gerber, according to USA Today. The company chose her photo, and in 1931, made it the brand's official trademark, as CNN reported. It is still used as Gerber's logo today. Since then, the brand has appointed a slew spokesbabies, including little Lucas, who made history as the brand's first spokesbaby with Down syndrome.

Lucas and his parents, Jason and Cortney Warren, were on vacation in Tampa, Florida last week, and when they realized Cook lived there, they contacted Gerber about meeting the inaugural spokesbaby, according to CNN. On June 2, the family stopped by Cook's home.

News of the adorable meeting came from Cook's grandson, Chris Colin, on Twitter. Earlier this week, he tweeted a pretty amazing photo (as seen below) of Lucas sitting on Cook's lap.

Alongside the photo, Colin gave a bit of background about his grandma.

My grandmother was the Gerber baby. It was a funny bit of trivia, never made her rich or got us free strained peas or anything. But last week she got to meet the company's newest spokesbaby, named Lucas. Pretty pretttty cute.

Cortney and Jason had a great experience watching their son bond with Cook, telling People "she and Lucas immediately bonded." She went on to to tell the publication, "Lucas walked right up to her, flashing his signature smile and waving, and we could tell he loved her right away."

The couple also added that they were grateful for the experience of meeting Cook, according to People, and little Lucas even "grabbed two cookies" and offered one to his predecessor.

It's no surprise that Cook and Lucas bonded so instantly. “She just loves babies,” Colin told People of his grandmother. “She thinks of herself as sort of the face of babies. And because of this funny thing that happened, she gets to meet all these really wonderfully cute little babies in life.”

Unsurprisingly, perhaps, Colin's tweet went viral, racking up more than 68,000 likes. Many responded to Colin's tweet, admiring how wholesome and heartwarming the meeting was.

Cook has been keeping very busy in the nine decades since she was crowned as the first Gerber baby. She has authored several mystery novels, which are available on Amazon, she worked as a teacher, and she has six great-grandchildren, as People reported.

Gerber appointed Lucas as its newest spokesbaby this past February, TODAY reported. At the time, his father Jason said in a statement, according to TODAY:

We're hoping this will impact everyone — that it will shed a little bit of light on the special needs community and help more individuals with special needs be accepted and not limited ... They have the potential to change the world, just like everybody else.

Additionally, when Gerber announced Lucas as its spokesbaby, his mom Cortney opened up about why it was so significant. "He may have Down syndrome, but he's always Lucas first," she told TODAY. "He's got an awesome personality and he goes through the milestones of every child... we're hoping when he grows up and looks back on this, he'll be proud of himself and not ashamed of his disability."

Who knows — maybe 90 years from now, Lucas will be meeting with Gerber's spokesbaby of the future!