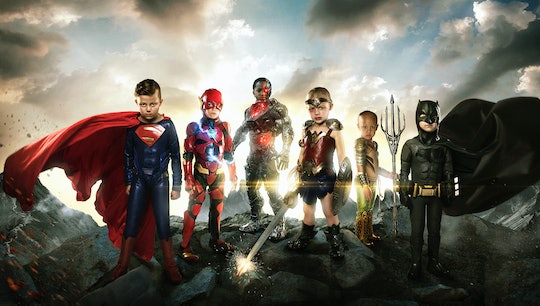 These Photos Prove Kids With Disabilities Can Do Anything

Commercial photographer Josh Rossi of Utah is a fan of superheroes. In fact, he and his 3-year-old daughter loved Wonder Woman so much, the two of them completed an incredible photo shoot with the little girl all dressed up as the best superhero ever (according to me and also everyone). Because Rossi seems to understand instinctively the pull of the superhero for kids, he's decided to go one step further. So, if you want to feel better about the world in general, check out Rossi's epic Justice League photo shoot featuring kids with disabilities dressed as their favorite superheroes.

As Rossi explained to Romper:

The inspiration for the shoot came after I created a Wonder Woman series for my daughter earlier this year that went viral. Many families reached out to me saying that their son or daughter with cancer was the REAL superhero. It got me thinking and eventually searching for the REAL superheroes which were these kids with unique disabilities.

He and his wife, Roxana, set out on a journey to photograph the real Justice League, and find them they did. The couple paired up with costume designer Julie Whitely, who created the most unreal costumes you could possibly imagine, to help these kids (all of whom are living with a disease or disability) see themselves for what they truly are: the superheroes we need.

Simon Fullmer is a little boy who is living with neuroblastoma (a type of cancer that attacks the nerves). Simon's mom told ABC News that Simon is something of a straight shooter; he's not a fan of having things "sugarcoated" for him. Much like the Dark Knight.

At the age of 9, Teagan has already been through multiple surgeries and waited more than a year for a heart transplant (he was born with half a heart, a condition called hypoplastic left heart syndrome). Now though... Teagan is very clearly Superman.

Sofia had just undergone radiation therapy to help with her rare retinoblastoma (eye cancer) before this photo shoot. Her eye is swollen, red, and sore. She must have been exhausted. But one look at this fierce little girl is all the proof you need... she is Wonder Woman.

Kayden had his legs amputated when he was 1 year old due to a disease which caused his organs to grow outside of his navel. Much like Cyborg, as Rossi noted on his website:

In Cyborg's younger years he was a healthy boy until he had a horrible accident. His father kept him alive by giving him robotic parts. Kayden is our first Justice League member!

Rossi made a wise decision in choosing 7-year-old Zaiden as The Flash; he has severe ADHD and loads of energy. Just like The Flash; lightning quick and always moving.

As the youngest member of the real Justice League, 2-year-old Mataease is more than a match for his fellow superheroes. He had just finished a round of chemotherapy for his cute megakaryoblastic leukemia when he was photographed as Aquaman.

Each of the young superheroes was given a poster of their picture (to watch their videotaped reactions, visit Rossi's blog post) to commemorate the day they finally became their true selves. So, how did the kids feel about representing the Justice League? Rossi explained to Romper:

The kids loved being photographed and Teagan who played Superman said that this was the third best day of his life!

And their parents loved it too. Kayden's mom (aka the mom of Cyborg) Nikki told ABC News her son was thrilled:

He was like, "Wow. Mommy I love it. I’m a superhero now." He’s a double amputee so to see himself standing up straight like that without his sticks or anything, he was just amazed. It was wonderful. I love to see him smile.