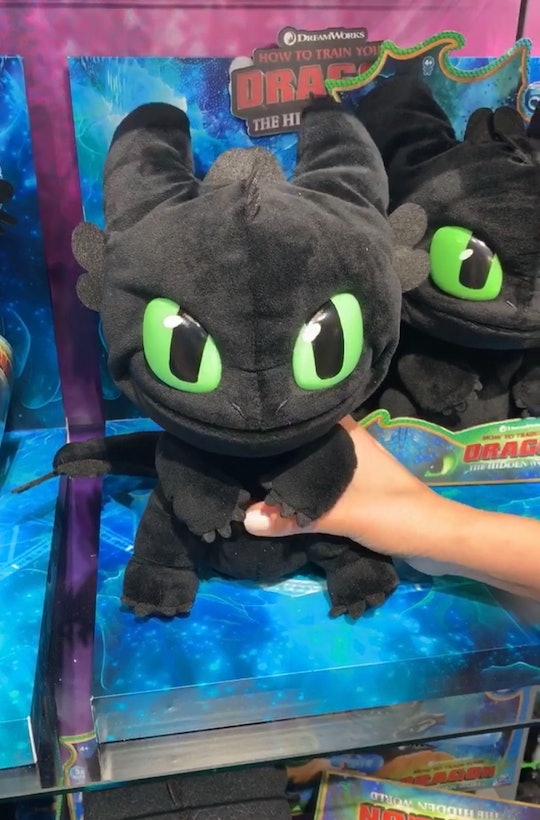 This Plush Toothless Bares All Of Its Emotions With A Tummy Squeeze, & It's *So* Cute

You don't have to be a kid to be obsessed with dragons — I think pretty much everyone in the world would take on their own little Norbert (a la Hagrid in Harry Potter) or Drogon (hey Daenerys). But if you are a kid obsessed with dragons, chances are it's with Toothless, the Night Fury dragon from the hit movie How to Train Your Dragon. I can't say I blame any child for this obsession — he's seriously the world's cutest dragon — nor can I blame any child who suddenly needs the plush roaring Toothless coming out this fall from Spin Master.

I know — your house is already overrun with every version of Toothless imaginable, but this one is really cool. Spotted at the New York Toy Fair, this new plush Toothless from Spin Master is officially known as the Squeeze and Roar Toothless Plush. Available this fall for $29.99, this Toothless shows off his ferocious side with a squeeze of his belly. When you squeeze, his facial expression changes, his ears move back, and he shows off those sharp teeth — all as a roar emits from him. But when you let go, Toothless is back to his sweet, lovable self.

So cute, right? The product was created with kids 4 and up in mind, so make note of that before you buy. But any little Toothless fan is going to fall in love with this plush. It's just interactive enough for the youngest How to Train Your Dragon fans, but it's also soft and cuddly for bedtime.

This is just one of the new How to Train Your Dragon toys Spin Master is releasing this year. At the New York Toy Fair, both this sweet plush and an actual hatching Toothless were revealed. The hatching Toothless is basically a How to Train Your Dragon version of a Hatchimal. Kids can have their very own Toothless "born" by tapping on the egg until Toothless becomes irritated enough to bust out and meet them. Once Toothless is out, they can interact with your child by blinking their eyes, moving their ears, and your kids can teach them to "fly" by holding them in the air and soaring.

Remember what I said about everyone wanting dragons? Um, hello.

It's pretty amazing how interactive these toys can be, but at the heart of them is the magic of owning your own little dragon. The plush one is especially sweet because it doesn't take much for your kids' imagination to run amok with little Toothless. And I'm no psychologist or anything, but I love thinking that the little dragon that can be squeezed from happy to ferocious and back to happy is an effective way to talk to your kids about their feelings and emotions. Toothless is allowed to be angry or loud or boisterous, but then they're also allowed to be sweet, and happy, and smiley. It's a great lesson for kids, and if there's not enough magic in that realization, hello — it's a dragon. And your kids are going to love it.