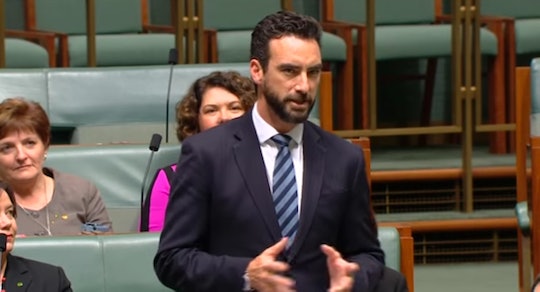 It's no secret that paid parental leave is seriously lacking in the United States, and though there's plenty of research showing the importance of giving new parents time to bond with their babies, it's something that just isn't accessible for far too many parents. But while the importance of parental leave for mothers might be obvious (breastfeeding and physical, post-birth healing being only the beginning), parental leave for fathers is often considered a perk, or a privileged afterthought. But in Australia on Wednesday, representative Tim Hammond resigned so he could be a better dad to his kids. And while that may seem like a pretty radical move, his decision will hopefully send an incredibly valuable message to parents everywhere about the importance of fatherhood, and why it's long past time that it becomes acceptable for men to prioritize their children ahead of their careers.

More Like This
High School Valedictorian’s Speech Taking Aim At Texas’ Restrictive Abortion Law Goes Viral
What Can We Expect When The Bidens Meet With The Queen?
China Hopes New Three-Child Policy Will Boost Declining Birthrates
Where To Travel With Your Kids This Summer

Forty-three-year-old married father-of-three Tim Hammond was elected to represent Perth, Western Australia, in the Australian House of Representatives in 2016, according to Australia's ABC News, but in a surprise statement to national news media, Hammond explained that the two years he'd spent as a federal politician had taken a much bigger toll on his family life than he ever expected it to.

Hammond explained that, despite his career success — he had been seen as a potential future party leader, according to The Australian — the job had caused him a "significant amount of unhappiness," particularly as it involved so much travel and time away from his wife, Lindsay, and their three young children, Sidney, O'Hara, and Tully.

Reading his statement to the press, Hammond became emotional at times, explaining that while he didn't want to let his constituents down by forcing a by-election, he ultimately had to make the best decision he could for his family, according to the The Australian. Hammond said

I know the inconvenience [a forced by-election] places upon my local community. I would just ask for their understanding, in that this is something that I know I need to do, so when I'm 75 years old and I look back on my life ... [knowing] that I've been there for my kids is the most important thing I could possibly do.

In a separate interview with a Perth radio station, Hammond explained that his career obligations meant he couldn't be as "present [as he] needed to be at home as a dad to three wonderful little children," according to The Australian, and said, "what’s fundamentally crucial to me is I’d never get this time back in terms of being an important figure in the lives of my kids as they’re growing up."

Hammond said it took him about 18 months to come to the decision, according to The Sydney Morning-Herald, and by all accounts, it wasn't an easy one. Yet it would have been during that time that his wife would have become pregnant with their now 6-month-old son, Tully, and it is completely understandable that being away so often with a newborn at home would have been agonizing.

On social media, the reaction to Hammond's announcement has been largely positive, with many noting that, while they were sad he was leaving politics, they definitely supported his need to be with his family:

Yet as much as Hammond's decision to leave politics behind was a personal one, it also highlights some much bigger issues that affect dads and their families in general. For one, the fact that Hammond was even able to step back from his job to be with his family is something many parents can't do: in the United States, the Family and Medical Leave Act (FMLA) allows women 12 weeks of unpaid leave, yet, according toThe Washington Post, a 2015 report analyzing data from the Department of Labor found that as many as 1 in 4 new mothers return to work within two weeks of giving birth. Unsurprisingly, a recent study from Ball State University found that fathers aren't getting much time off either: of the relatively few men who do have access to parental leave take a week or less, according to Bloomberg, and they're also less likely to take time off for subsequent children, even though there are big benefits for the entire family when dad takes more time to be at home.

But it's also not just a matter of finances. In a similar way that women are often penalized at work for having kids, many dads who would like to take more time to be with their children feel like it would be hard to actually do, thanks to the fear of being judged at work, or because they feel "their [supervisors expect] no change to occur to their working patterns as the result of their becoming parents," according to Fortune.

By announcing his resignation from politics, Hammond was making a much bolder move than simply taking a parental leave, and it certainly isn't something that would be realistic for most families. But given how reluctant many dads are to take time off at all due to lingering outdated beliefs that somehow men shouldn't be affected by a new baby's arrival, it is a powerful message.

While other dads may not be able to walk away from their jobs, they might at least be inspired to push back at expectations that their family responsibilities should take a backseat to their job obligations. And, in time, hopefully it will start to seem less shocking for a man to choose to put his children ahead of his career.