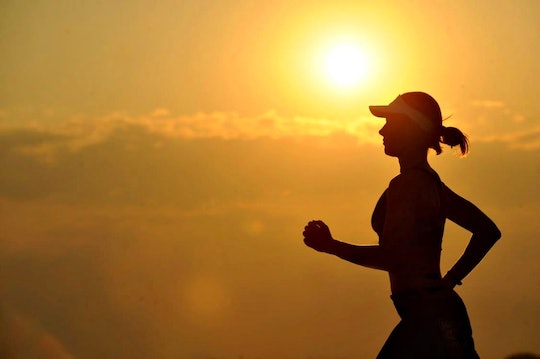 The ads don't mention the experimental drug specifically, but they're on buses, conference booths, and a special website that provides resources for women living with postpartum depression. The images show a diverse groups of women with pacifiers in their mouths, under various stages of emotional duress. Some are crying, others are angry, many have an empty sort of expression on their face. The tagline? "Silence sucks."

The pacifier is meant to symbolize the fact that women need to talk about postpartum depression more, since that's always the first step to treatment and battling the stigma around it. But some people find the campaign insulting, claiming that it "infantilizes" women, according to Stat News. Some believe that it implies that women are to blame for the "silence" surrounding PPD, yet it's up the medical community to start communicating with their patients about PPD, too. (Romper has reached out to Sage spokespersons for comment on the campaign and is awaiting a response.)

For what it's worth, Sage addresses that on its website, writing that half of PPD cases go under diagnosed. Namely because women are reluctant to talk about their feelings out of fear of seeming like a "bad mother," or because doctors just don't ask women about it or don't explain the symptoms to their patients, so many don't know what to look for. The symptoms of postpartum depression aren't always obvious, so the more that women are educated about them and encouraged to talk about them the better. Which is why is appears that Sage's campaign came in peace.

Still, postpartum depression activists aren't thrilled by the imagery in the campaign since it seems to put the onus on the woman and not the professionals. "Even if they had just used the pacifier alone, that would have been better than having women experiencing rage, pain, and sadness with baby pacifiers in their mouths,” Mara Acel-Green, a Massachusetts psychotherapist who specializes in counseling women with postpartum depression told Stat News.

Still, other women found it "reassuring," simply because there was an ad normalizing postpartum depression in the first place. Both groups likely have a point.

Women will likely hear more about Sage in the coming months and years as it work on its postpartum medication, brexanolone, which restores the balance of neurotransmitters in the brain. The drug works quickly, which is key for women living with postpartum depression, since antidepressants on the market right now can take weeks to start working. According to a report released this week, the trials are going well so far.

So, while the campaign may have been a bit controversial, in the end, the company will likely end up doing more harm than good for women with postpartum depression.