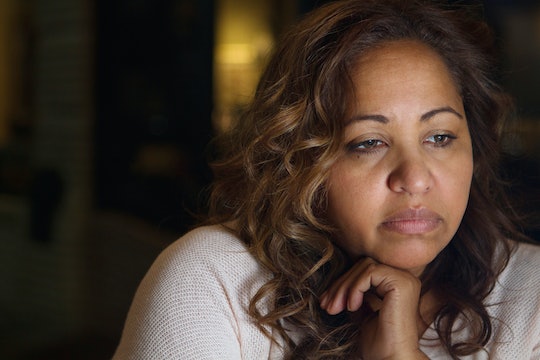 What Are The Signs Of Postpartum Depression? They Aren’t As Obvious As You May Think

Two days after I came home from the hospital with my newborn daughter, I found myself sobbing in bed and cradling her to my chest. I couldn’t explain to anyone why I was so upset or what was happening. There was only one word that can convey what I was feeling — sadness. I would feel fine in the mornings, but as the day wore on, I became paralyzed with a darkness. I was concerned and couldn’t figure out what was wrong. I was worried that this was one of the many signs of postpartum depression.

It turns out my experience was nothing more than a case of the post-baby blues, which the American Pregnancy Association notes is a feeling of sadness that occurs in 80 percent of mothers soon after their child is born. I was lucky, as the baby blues only last for around ten days. But, according to Postpartum Progress, 10 to 15 percent of new moms suffer from postpartum depression, or PPD, an extended period of sadness that causes some women to think they aren’t capable of caring for their child.

It’s incredibly important that you talk about your feelings and speak to your doctor, regardless if you think it’s baby blues or PPD. To better understand symptoms of PPD and what can cause them, I spoke with Katherine Stone, founder and director of Postpartum Progress, a nonprofit organization that raises awareness about PPD while offering a safe place for women to find support. “When you recognize you are not yourself and that you aren't able to function on a daily basis as you would like, that’s a sign,” Stone says. But as she also notes that “what PPD looks like for one mom is not what it necessarily looks like for another” so it’s important not to stick to list of symptoms when it comes to helping yourself or another new mom. That being said, there are some symptoms of PPD that are fairly common. Here are just a few signs that you or another woman has more than a touch ouch of the baby blues.

More Like This
Abbot's Formula-Producing Plant Can Reopen In As Early As 2 Weeks — Now What?
Can You Help Your Baby’s Hair Grow?
Breaking Down The Different Types Of Postpartum Infections
Here’s What You Need To Know About That Viral 1960s Baby Formula “Recipe”