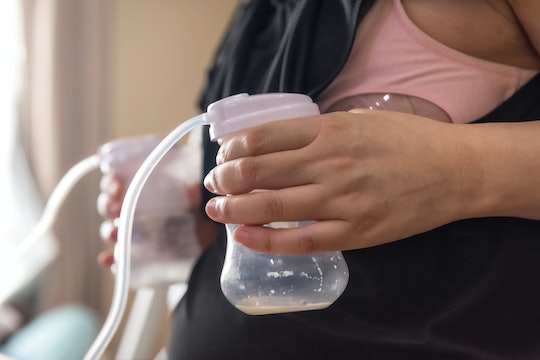 When I was pregnant with my daughter, I found everything about the idea of pumping to be one of the most intimidating aspects of the inevitable postpartum phase. All of the suctioning, measuring, storing, and paraphernalia just felt so overwhelming. When I asked fellow moms, they said fairly similar things, including my sister who said "it was so much harder then just pulling out my boob." But, it's a necessity for many women, right? That's why it's safe to say this pumping hack might change your life in all the right ways.

More Like This
Um, "Rusty Pipe Syndrome" Is A Thing, & Every Breastfeeding Mom Should Know About It
These Pregnancy Symptoms Can Be Easy To Miss When You're Still Nursing
How To Keep Your Toddler Busy While Feeding Yet Another Human
Here's The Deal With Biotin & Breastfeeding, According To Experts

You can imagine many pumping moms had an "aha!" moment of sorts when they saw this post on My Pure Delivery's Facebook page that showed a mother using a pumping flange — the piece held to your breast during pumping — as a funnel to transfer milk into a storage bag. Readers commented to say things like, "What a legend!!! I’ll be doing this next time" and "it’s so 'duh' I can’t believe I never thought of it." One mom even wrote, "Wish I would’ve known this! I spilled that liquid gold too many times and wanted to cry!"

Because what pumping mother hasn't been the victim of spilled milk after spending 20 to 30 minutes to pump a whole 4 ounces? You know the moment — it's the one where you feel the urge to scream, sob, yell, and punch the nearest person who cracks a joke and says something like "well, there's no use crying over spilled milk."

Of course, there are some other primo tips for pumping, including pumping when you get out of the shower and investing in an electric pump to ensure the best results, according to Baby Center. One mom even told the website, "I would sometimes let the baby nurse on one side and then pump on the other side. The flow was remarkable and I still had enough to feed the baby."

As for successfully transferring milk, some moms learned to pump directly into the bottles by using a special attachment that allows you to avoid the transfer from pump containers to the bottles your baby uses. Perk? No spillage.

Of course, if the goal is to pump and store in bags, then the funnel trick is definitely one you are going to want to lean on. If you are storing milk, then be sure to wash your hands beforehand in order to keep things sanitary. Once you transfer the goods to sterile zip-seal breast milk storage bags, you'll want to make sure you label the containers with the date the milk was pumped and your baby's name, according to the Texas Department of State Health Services. "This is helpful if your baby goes to child care where there is more than one infant or if more than one mom is pumping at work," the website noted.

Allow the milk to cool and then store in the refrigerator if you are planning to use it within eight days, according to Ameda. "Otherwise, store it in the coldest part of the freezer, where it can remain for up to four months," the website noted.

Take note that if you do freeze breast milk, thawing it should not include the microwave, according to The Bump. "Doing so can kill all the breast milk’s living immune properties and create hot spots that can potentially burn baby's mouth or throat,” Tamara Hawkins, International Board Certified Lactation Consultant (IBCLC) and director of New York City-based Stork & Cradle told the website. Instead, thaw stored milk by leaving it in the refrigerator overnight or placing it in a bowl of warm water to thaw." Another reason why planning is crucial when it comes to pumping and, man, will those flanges make it easier.