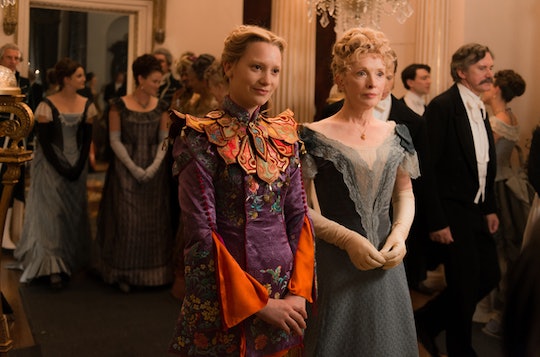 You have to give Alice a lot of credit. In the new movie Alice Through The Looking Glass, the girl's got game. She's running her own show, now that she has taken over her father's ship "The Wonder," and battling pirates with some slick moves in the process. She's wearing whatever the hell she wants, no matter what the other ladies in Victorian-era England (even her mother) might think. Alice is carving her own path and generally excelling at being a bad-ass. But there is this one quote from Alice's mom that reminds us why we need feminism, no matter what reality we're living in.

Alice's mother, Helen Kingsleigh, does not share her daughters insatiable curiosity (or her courage, for that matter). Everything that makes Alice different and strong is terrifying to her mother. She wants her daughter to live a regular life, with a regular husband and a regular home. Because regular is safe, isn't it? Despite the fact that Helen's choices have landed her in a very unhappy position, she still craves some sense of social acceptability. So she tells Alice,

You can’t just make things the way you want, Alice. Every woman has to face that. I had to.

How awful for not only Alice, but her mother as well, to think that women are so powerless in their own lives — mere spectators in the events that shape them. For Helen, those events are marriage, motherhood, the death of her husband, and a new relationship that she finds wholly unsatisfying but helpless to improve. Because that is what she has been taught as well. At one point she asks of her daughter, "Aren't you afraid?", which is just about the saddest sentence ever. Helen is clearly paralyzed by her fears, and so expects the same of her child.

Their relationship can serve as a pretty powerful reminder to mothers and fathers, uncles, and aunts — shapers of young minds the world around — that our own experiences, whatever we carry from our past that is inhibiting us, don't have to shape the next generation. Parents now teach their girls and boys about their own power, their own light, without having the kids' (too often dimmed) lights guide them in the wrong direction. The beauty of progress, as Alice Kingsleigh, captain of her own ship and sometimes guardian of the magical realm of Underland, knows is that kids get to pick out who they want to be. I am tempted to give examples of all of the things our children could be, but even a list like that feels limiting, as if I'm giving them a subconscious list of options from which they should never stray.

They don't have to pick from any sort of predetermined list at all — not even when it comes to gender. Alice does a beautiful job of tearing down gender norms, and it works in our world as well. Not being defined by gender means limitless options, it means we can treat each other as human beings first and always.

So let us teach them kindness, and empathy. Let us teach them to be curious, to explore. And beyond that, they can teach us about who they are without any parameters. If you're wondering where that might lead us... go ask Alice.