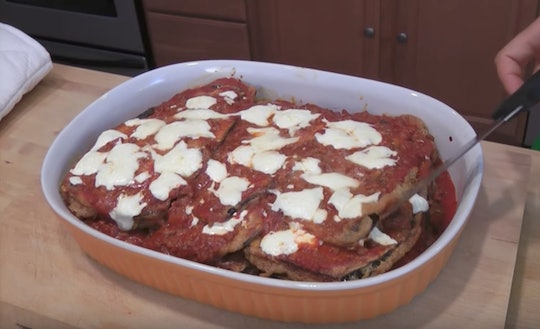 Georgia Restaurant Claims This Dish Induces Labor, & Here's Why That Might Actually Be True

When a woman is 40 weeks pregnant and her due date has come and gone, she'll do just about anything to get that baby out. Since the beginning of time, old wives tales have claimed that doing an array of things — from going on a jog to eating spicy food — will induce labor. But maybe the next time women want to speed up their delivery, they should think about eating eggplant parmesan. Seriously, this restaurant claims this dish off their menu induces labor and I'm willing to believe it.

Don't believe me? Scalini's manager, Robert Bogino told Today that around one to two women a year have their water break in the restaurant even before the check comes around. Bogino told Today:

That's always exciting when it happens. Once, a father even came up and said, "Can we get our food to go?" I think his wife really wanted to get going to the hospital, though.

The myth is, women typically go into labor 48 hours after eating Scalini's eggplant dish, which is comprised of breaded and fried eggplant, four different cheeses, and marinara sauce. And if those pregnant women do go into labor 48 hours after eating the dish, they receive a special reward in addition to having their child delivered right on time. According to TODAY, these women receive a $25 gift card to Scalini's (to be used for their next pregnancy?), a onesie for their newborn, and their baby's photo on display in Scalini's forever.

Seeing is believing. You can visit Scalini's website, where they have a page dedicated to the so called "Eggplant Babies," complete with testimonials from parents and photos of the beautiful babies born after their mother consumed the famous eggplant dish before their birth (there are a lot of them).

Can't make it to Georgia, but still dying to test this out for yourself? Scalini's is more than open to sharing the famous recipe, which you can print out and try for yourself here. Whether or not it actually works is a different story. One Romper mom actually tried the dish in January and went into labor a little more than 48 hours after eating it. But one Bon Appetit journalist found it to be unsuccessful (she gave birth 10 days later).

A bit of everything could contribute to the dish's success in inducing labor. According to Bon Appetit, its the combination of eggplant (which is rich in vitamins), herbs (which can soften and thin the cervix), and the "Italian tendency to overeat" (the verdict is still out on that one). But like most old wives tales, a lot of the magic is believing that the theory will work (because there is no food that is scientifically proven to induce labor).

Even if Scalini's recipe doesn't induce your labor, you can at least walk away from the dinner table with your belly satisfied from eating a delicious and cheesy meal.

More Like This
A New 'Golden Girls' Themed Restaurant Is Happening!
Chrissy Teigen Gives a Cheeky Behind The Scenes Peek Into Her Pregnancy Glam Squad
A New Survey Shows 74% Of Women Would Drain Their Savings On Maternity Leave
30 Marvelous Baby Boy Names That Start With “M”