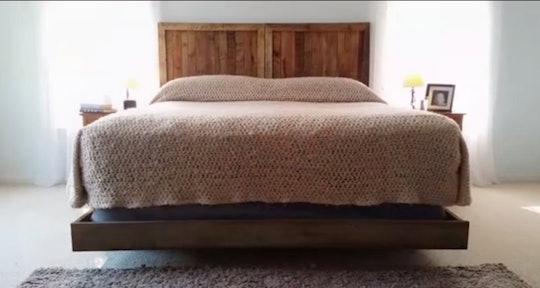 If You Secretly Want To Be Rocked To Sleep Like A Baby, This Bed Is For You

I swear I read about a new cure to insomnia everyday. To be fair, the prevalence of insomnia today is astounding, so it makes sense there are so many approaches to fixing the problem. Tweets preaching the gospel of the latest FDA-approved sleep aid and Instagram ads for digital detoxes that will help me fall asleep faster than ever before haven't done much for my sleeping habits so far, but I am intrigued by the latest invention to help you catch some zzz's: a Rocking Bed for adults that will literally make you sleep like a baby.

Before I give you the run down on the most maternal bed in all the land, let's get some facts straight about the current state of sleep. Insomnia is basically an epidemic in the United States at this point, with Penn Medicine reporting that one in four Americans will develop insomnia each year in 2018. Similarly, Gallup found that 40 percent of Americans aren't getting enough sleep per night in a study in 2013, and Forbes explained that the country's collective sleepless nights are fairly new: Apparently, American adults slept an average of nine hours per night in 1910. There's no singular known reason for the growing sleeping problems in the U.S. to date, though scientists point the finger at a variety of causes such as stress, inconsistent sleep patterns, and too much screen time according to the Huffington Post. The lack of cause explains the wide array of possible solutions.

Tech-based solutions for sleep are on the rise, which led to the adult Rocking Bed (recently showcased at the 2019 Consumer Electronics Show), a steel bed frame with an uber quiet motor designed to rock you back and forth while you snooze, making you feel like a baby in your mommy's arms. Seriously, that's part of the science of the invention: "Rocking beds can bring back people's memories of being rocked to sleep by their mothers, triggering feelings of safety and comfort," stated the Rocking Bed website. Wild, right?

The bed also works by "help[ing] your mind focus on a single stimulus," allowing you to block out the many stressors running through your brain so you can actually fall asleep. Science Direct found that being rocked during a nap synchronizes your brain waves, so the theory behind the idea is definitely sound. Similar products already exist for actual babies; it's honestly surprising it took this long for someone to give an adult version a try. Check out the video below for a full demo.

As you can see, the rocking isn't too intense or disturbing; C-NET says it's more like "the frame glides the mattress smoothly back-and-forth." Plus, you can adjust the speed of the rocking, allowing you to sway as little or as much as you want. The product was first unveiled at the 2018 CES and was back at the 2019 show, and consumers (as well as Kelly Ripa and Ryan Seacrest) are in agreement that it's not a want, but a need.

Patrick Holland of C-NET gave it a try at CES, and he reported feeling "calm as well as relaxed" after trying it out, the experience peaking his curiosity about what actually sleeping on a Rocking Bed for an entire night would be like. My guess is some would find it comforting, but if you suffer from motion sickness, you'd probably hate it — founder Mark Russell got the idea for the invention after sleeping on a cruise ship, C-NET also reported.

For those who don't get queasy on boats or swings, you can order a Rocking Bed on the company's website in full, queen, and king sizes, but be warned, the life-changing frames are pricey: Each size sells for $3,450.

The product is still pretty new, and there haven't been definitive studies to prove the bed will actually cure your insomnia. But if you haven't slept well since your mom was actually rocking you to sleep every night, it might be worth a try. A REM cycle could be just one big purchase away.