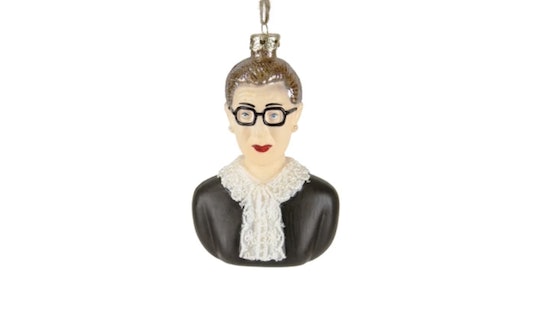 It's a good rule of thumb to avoid talking politics with family during the holidays. Who needs the drama when you're just trying to enjoy the adult eggnog and the fire? But if you're looking to dive in head first this year, hanging this Ruth Bader Ginsburg ornament front and center on your Christmas tree is probably the cutest way to do it.

"I wasn't 100 percent sober," is a real thing that Ruth Bader Ginsburg, associate justice of the Supreme Court of the United States and national treasure, said in an interview about why she fell asleep during the State of the Union during President Barack Obama's term, according to The Huffington Post. If that's not a reason to love her, what is? Well, there's also the fact that she consistently champions women's equality and the need to break down gender stereotypes for both men and women. And when she gave the nation a scare with her health earlier this year, she announced her return to work by telling NPR that, not to worry, "I am very much alive."

If you're a fan of the notorious RBG, then you need this Christmas ornament to dissent from the majority while hanging on your tree. It features Bader Ginsburg's signature pulled back hairstyle and black glasses frames. You can also see her statement earrings peeking out. And while Bader Ginsburg hasn't been rocking a red lip in real life lately, it does look pretty powerful on her here.

Of course, no RBG ornament would be complete without one of her infamous collars. This one isn't her most recognizable, which would be the dissent collar, but white lace neck pieces are something she's seen in often. CNN pointed out that Bader Ginsburg began wearing collars to follow in the footsteps of Sandra Day O'Connor. The first female justice wore them to feminize her black robe, because the robes' cut looks masculine and displays men's neckties. Bader Ginsburg's collars have become her way of making her opinion known and throwing some fashionable shade when the rules of her position dictate that she technically stay neutral. The ornament comes in at $24, but the dissent is priceless.

If you're in the market for some additional RBG merch, AlwaysFits.com has an array that would make cute gifts and stocking stuffers. Their Ruth Bader Ginsburg mug is great for coffee at home or as your dedicated desk mug, and RBG also makes an appearance in this Boss Babes adult coloring and puzzle book. The shop even offers a variety of birthday cards with sentiments from the Supreme Court justice to celebrate the birthday boy or girl (i.e. "Stay strong...and dissent all year long!").

If you're looking to purchase an RBG Christmas ornament for a family member, friend, or for yourself, keep your eyes on AlwaysFits.com. Their holiday merchandise will ship late Sept. 2019, and will be up through January 2020 should you gift yours and decide you need another. Happy holidays, and merry heated political discussions as you gather 'round the tree!