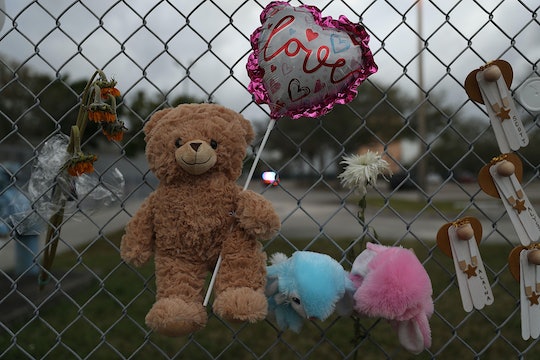 This Sculpture By A Parkland Victim's Dad Is So Powerful

It's an image no parent ever wants to see; a child huddled and hiding under a desk. Shoulders hunched, eyes on the ground, terrified. And yet that is exactly what this sculpture by a Parkland victim's dad captures. A level of fear that no child should ever be forced to experience, especially not when they are simply going to school. As upsetting as this sculpture happens to be, it was created with deliberate intention. As a reminder and a tribute that the shooting at Marjory Stoneman Douglas High School in Parkland, Florida should really become the "last lockdown" in American history.

Artist Manuel Oliver lost his 17-year-old son Joaquin in February in the mass shooting in Parkland that saw 17 people killed and 15 more injured in a matter of six minutes. These bronze-coated sculptures, which were created with 3D printers as a nod to the fact that guns can be made with 3D printers, are meant to not only memorialize the lives lost but also keep voters aware of what can happen without more reasonable gun laws. Because it's happened before. As Oliver explained to the Chicago Tribune, "I know my son – he was a cool dude – and I know he would think this statue is a really powerful way to get our message across. That’s what art does, it stops people, makes them think. It connects with people in a more powerful way than trying to talk them into it.”

The sculpture depicts a young child hiding under her desk during lockdown procedures at school. Each desk is covered with statistics about gun violence, and Oliver worked with fellow artist Sean Leonard to create this project the two called "The Last Lockdown." As midterm election season starts to get underway, student activists are set to place 10 of these statues at voter registration centers around the country in cities like Parkland, Las Vegas, Minneapolis, Denver, Houston, Philadelphia, and Millwaukee. Some of these districts were chosen, according to CNN, because representatives in each of them have been known to take money from gun lobbies. Others were chosen because of the terrible violence that has already happened, unfortunately.

As artist Leonard explained to the Chicago Tribune, these statues are meant to make people uncomfortable:

We have been calling them chilling, pop-up art installations. We keep going back to the fact that statues are typically celebratory or honoring someone, but we are taking that idea and flipping it. We wanted the realism. You should feel unsettled when viewing these.

The concept behind the art installations is clear; don't let people fall into a safe sense of complacency again. Remind voters, over and over, that there is a better way. That children should not be going to school afraid for their lives. As Oliver told Huffington Post:

It’s too late for us to save Joaquin from gun violence. But through art my family and I are making sure that we protect the rest of the kids out there.

There are millions of children in the United States who need to feel safe. And if this art installation encourages voters to keep this in mind when casting their ballot... all the better.