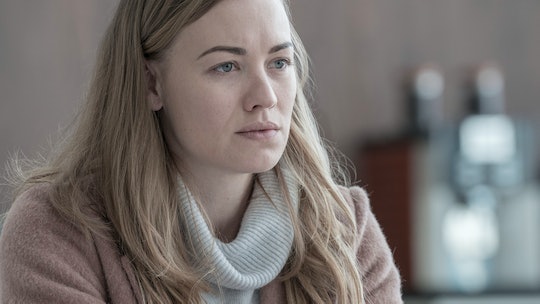 The first rule of The Handmaid's Tale is: Don't trust Serena Joy. The second season finale of the Hulu original series had fans gripping onto Mrs. Waterford's redemption arc when she chose to let baby Nichole leave Gilead for a better life. But everything came tumbling down in Season 3 after Serena Joy visited her child in Canada and decided to manipulate the system to get her back. Although most fans aren't exactly thrilled with her character's development, this theory about Serena Joy from The Handmaid's Tale will show you that there's still hope for Mrs. Waterford.

On The Handmaid's Tale subreddit, user bethesong posted a theory that could potentially shed some light on Serena's motives in Season 3. Following the sixth episode, titled "Household," the fan questioned Serena's sudden change about her baby's new life in Canada. In Episode 5, "Unknown Caller," Serena was reintroduced to Mark Tuello, the representative for the U.S. Government-In-Exile who proposed an escape plan to Serena in Season 2. The fan wondered if the reunion wasn't just a coincidence, and proposed that the events in Episode 6 were all part of an elaborate plan to get out of Gilead with Nichole at her side.

In the post, the Redditor explained that Serena's drive comes from her desire to be a mother, and at this point, Nichole — previously known as Holly — is Serena's only shot at happiness. So now that Serena understands that "there is no way that Luke will allow her to be involved in Holly’s life," the fan pondered if Mrs. Waterford was "using Fred and her power to get Holly back into Gilead, only to run away to paradise and escape with her."

"It’s a plan she has come up with where Holly is 'safe' away from a future in Gilead, AND she gets what she’s always wanted — a child," bethesong wrote, adding that the act would mirror June's decision to stay in Gilead for Hannah at the end of Season 2.

Meanwhile, another fan contributed to the theory within the comments. After agreeing with the original post, brewedbyjewelz noted that Serena had a phone and a message in her purse that read, "Call if you need me."

"I think Serena is working with the Canadians," the fan wrote. "And this whole scheme with the prayer videos is to get images/info out to the world of Gilead."

The Redditor also hypothesized why Serena isn't letting June in on her secret plan.

"Serena knows the consequences if she is caught and that is why she is shutting June out," brewedbyjewelz shared. "She knows her chances of being in Nichole’s life is out of the question, she said her goodbyes, and Nichole is safe in Canada. If June knows anything she could be killed and then there is no hope for her to be reunited with Nichole or Hannah for that matter."

Although I would love it if The Handmaid's Tale had Serena "wearing the dress and pulling the strings," is she cunning enough to make this leap on her own? I'm not so sure, but it's only going to get more complicated from here.

Speaking with The Wrap, Yvonne Strahovski teased what's to come for Serena for the remainder of Season 3.

“Look, everyone has their own agenda. Serena has her agenda, June has her agenda, and they are against each other and carrying on as they do in their stubbornness and they want what they want," the actress said. "I think there is that and there is, in true Handmaid’s fashion, some surprises around the corner entwined in that.”