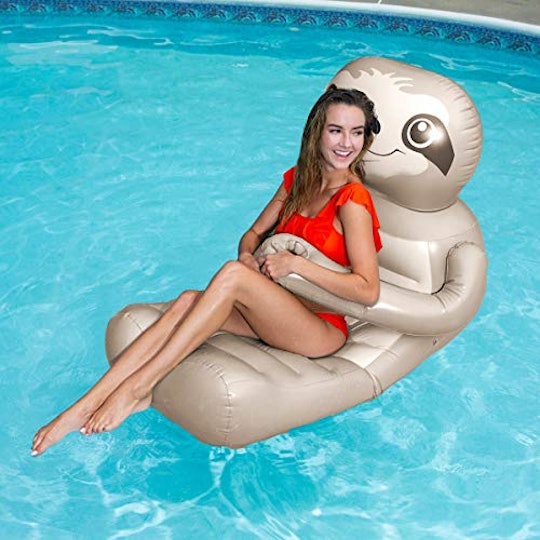 This Sloth Pool Float Literally Hugs You — Yes, You Need It For Your Lazy Summer

April flowers bring May showers, which I take to mean suffering through a rainy spring leads to sunny days at the pool all summer long. Of course, an afternoon in an oversized tub of slightly chlorinated water isn't complete without swim accessories, and SwimWay's sloth pool float is a must-have for summer. What better way to get in the lazy state of mind than to literally be wrapped in a sloth hug?

Sloths have gotten major buzz in 2019, with Bustle reporting that the infamously lethargic creatures are ousting unicorns as the "it" animal of the year. Something about their sleepy demeanor and arms made for hugging resonate with people; memes featuring the snooziest creatures alive (Live Science reports they sleep between 15 to 20 hours per day) are cropping up everywhere, and there has been what can only be described as an explosion of sloth products in the past few months, with everything from Sloth Fingerlings to "Let's get slothed" wine glasses making a splash. And now, you can bring that energy to the pool thanks to the geniuses at SwimWay.

The float is called the Huggables Sloth Pool Float, and it's pretty much a lazy person's dream come true. The oversized floatie makes lounging a breeze, as adults can sit comfortably on it — which is so not the case with every pool float. Plus, it literally "hugs" you, with the sloth's arms acting as arm rests you can wrap around you. (One arm also comes with a built-in cupholder for storing your summer drink of choice. Winning.) Take a look at the fun for yourself.

Is that not the most adorable float you've ever seen? The little sloth face is begging you to settle in for a swim. You'll be channeling their lethargic energy in no time, and it definitely provides an Instagram worthy aesthetic. #SlothLife awaits.

Take note of the fact that SwimWay's design lets you sit in the pool, which is a definite bonus. Horizontal floats can get a bit uncomfortable after a couple hours, and it's just not realistic for most parents to be lying down when their kids are near water. The sitting structure will keep you from craning your neck to see what's happening around you, so you can read, have a drink, and keep an eye on the kids as you relax. Sounds like heaven to me.

Even better news? The Huggables Sloth is part of the Huggables Float line, which also features Panda and Teddy Bear floats with the same basic structure. You can buy all three and have the most comfortable looking family at the neighborhood pool this year. If you want to take them on the road with you, simply deflate and roll them up for easy travel.

Each Huggables float retails for $40, and they're recommended for ages 5+. You can get a Sloth float for yourself on Amazon as well as on the SwimWay website. Better grab one fast, though; the site is already listing some of the floats as out of stock. Happy summer, everyone.