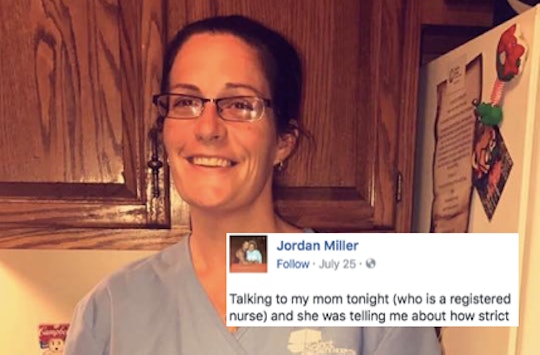 Picture this: You are in a car accident. Your vehicle is filling with smoke, and you are moments away from suffocating. All feels lost, until a woman reaches in and pulls you to safety. Unconcerned for her own well-being. Now picture her with tattoos. Do you care? Does it change anything about what she did for you? Does a person's body ink affect the way they do their job? This son who defended his mom's tattoos doesn't believe so.

Jordan Miller's mom, Misti Johnson of Carrolton, Ohio, is a registered nurse who actually did pull a woman out of a car filling with smoke before she suffocated. She also, by Miller's own admission, has "more tattoos than I can count." Johnson's tattoos had always been part of her, as far as her son was concerned, and never had any bearing on her nursing skills. So when Johnson mentioned the strict anti-tattoos policies of several hospitals to her son, he was baffled. Why would anyone care about his mother's tattoos when she was such a consistently conscientious caregiver? Someone who always went above and beyond even when she wasn't on duty? So Miller did what any good son would do: He stood up for his mom.

Miller shared a photo of his smiling mom in her scrubs on Facebook with the caption:

Talking to my mom tonight (who is a registered nurse) and she was telling me about how strict some hospitals are when it comes to employees having tattoos. I must say I am kind of confused. I've seen my mom pull a lady out of a car before it fills with smoke and she suffocates. I've seen her do stitches on an injured person on the side of the road following a car accident. I've seen her come home after a 12-hour shift, dead tired after dealing with an abusive patient all day, and get back up and do it again the next day. She's come home after holding a baby in her hands and watching it take their last breath. She's saved a drug addicts life after overdosing in the hospital bed. Tattoos don't define the person. My mom has more tattoos than I can count and it has never, ever affected her work ethic. She will wake up at the same time everyday and save a life.

If anyone needed any indication that Johnson did something right... simply look to Miller's automatic defense of his mom as Exhibit A.

Despite the mainstream nature of tattoos (42 percent of American adults have some form of tattoo, according to the Equal Employment Opportunity Commission), many hospitals still require nurses to cover up any ink they might have (the same holds true for body piercings). Or administrators can object over the old "tasteful" chestnut. If they deem a tattoo in poor taste, they reserve the right to nix it.

It seems the times they might be changing. Because Miller's supportive post about his mom's ink has gone viral, with 180,000 likes and 116,000 shares. Comments came from nurses who were proudly tattooed themselves, while others wanted to say that tattoos had essentially nothing to do with anything.

For her part, Johnson was simply moved by the support of those around her. She wrote on Facebook:

Thanks again everyone. Y'all are great. It's unbelievable the likes and the shares we have gotten. The support of tattoos is awesome. My heart is feeling very warm from y'all.

All because she has a son who stands up for his mother. Her heart should be feeling very warm indeed.