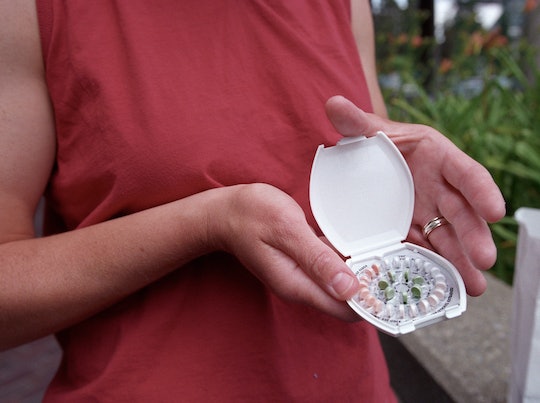 This State Is Helping Low-Income Women Pay For Birth Control

Under the current health care law, the Affordable Care Act or Obamacare, most birth control is covered for women who have insurance. This is one of the many benefits of current health care laws in the nation. But this excludes many women who don't have insurance or the means to obtain it, or those who have simply fallen through the cracks in the system. During a time where the future of healthcare is so uncertain, Utah is trying to help low-income women pay for birth control and it is a huge step forward for women everywhere.

Utah state Rep. Ray Ward has proposed legislation in the state within the next year that would "cover the costs of birth control for poor women who aren't eligible for Medicaid or other government insurance programs," according to The Salt Lake Tribune. Under Ward's legislation, the state would do so by taking advantage of Title X, where the government would (hopefully) pick up a majority of the cost. By providing birth control to low income women, Ward told members of Utah's Intergenerational Poverty Committee, women could get out of poverty and have more family planning tools at their disposal.

As previously stated, Obamacare covers FDA-approved contraceptive methods for women who have insurance, even if they haven't met their deductible. But for the millions of women who don't have insurance, a pack of birth control can cost up to $50 and a visit to obtain the pill can cost anywhere from $35 to $200, according to Planned Parenthood.

Ward's proposal would cover the costs of birth control that require a trip to the doctor, in addition to covering the cost of the birth control. According to The Salt Lake Tribune, his plan is estimated to save the state of Utah $9.6 million over the course of five years. But right now, this is only a proposal, and it is currently in its working stages, according to Ward's Facebook page. Ward said in a statement on his Facebook page, that he hopes the proposal will gain momentum with a little national attention:

I was glad for the chance to present this at the State's Commission on Intergenerational Poverty and glad for the news articles. It really is an idea that accomplishes so many goals, savings to the state Medicaid budget, provision of family planning services to women under the poverty level, and a decreased number of abortions. I am hoping that working on it over the summer will give it some momentum when we come around to the session next year.

Ward, who is also a family practice doctor, stated in a comment on his page that through this legislation, clinics would be able to provide birth control to women on a sliding scale, and get reimbursed by the state for providing the service.

This would be beneficial in so many ways. Not only would it provide birth control to women who can't obtain it (obviously), it would save the state money, save taxpayer money on Medicaid, and potentially help 8,000 women who live below the poverty level, according to The Salt Lake Tribune. Utah is ranked 12th overall for poverty in the United States, with 12.6 percent of women between the ages of 18 to 64 living in poverty in 2016.

The future of the Obamacare is unknown. There could be major cuts to Planned Parenthood, Medicaid, and insurance requirements if a repeal of Obamacare is passed. This proposed legislation would be incredibly beneficial to all women in Utah if that repeal were to happen. Ward's thinking is a huge step in the right direction.