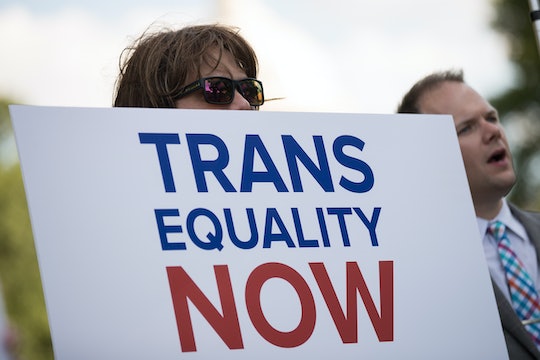 Big changes could soon be coming to birth certificates in Washington State. According to The News Tribune, Washington may soon let people change their gender on their birth certificates to a third, non-binary option: Gender X. Nothing's final yet, and there's already some of the expected backlash. But if this rule goes through, it has the potential to be an important, history-making recognition for a population of people who have been targeted and victimized for far too long.

The Washington Department of Health announced the changes on its website, writing that the department was "considering adopting" a new rule, which would do a few different things. While Washington already allows residents to request a change from male to female, or from female to male, on birth certificates, the new rule would "formalize" that procedure, literally, creating an official form that people seeking a change could fill out. It would also "establish a list of medical and mental health providers who can attest to the gender change based on the scope of practice for each profession," according to The News Tribune. Finally, and most headline-grabbing, the rule would add a "non-binary" option to the gender designation options.

Many people understand the word "transgender" to mean identifying as the opposite sex from the one with which a person is born. But it can be much more than that.

As the National Center For Transgender Equality explains on its website:

And that's what's known as being gender non-binary. According to USA Today, more than a third of transgender people identify as being non-binary, and yet the fight for trans rights often overlooks this group when it comes to issues like birth certificates, sometimes focusing only on the switch from male to female, and vice versa.

That's starting to change now, and those who prefer to use gender-neutral pronouns like they, theirs and them are beginning to get the recognition of their choices that they deserve. Oregon, for example, now offers an option for a gender "X" on driver's licenses and state identification cards. After the ruling that made that possible, a gender non-binary Oregonian named J. Gibbons told Oregon Public Broadcasting:

There are daily interactions such as checking out at a grocery store, checking in at a doctor's appointment — and an incorrect gender marker means the potential to be misgendered and have painful and very uncomfortable experiences at all of those stages... I'm incredibly thrilled to be an Oregonian right now

So it's clear that, if Washington goes through with adopting this new rule, many people will be able to feel much more comfortable and respected for their lifestyles.

But, unsurprisingly, plenty of people plan on fighting against that acceptance, including the Family Policy Institute of Washington. Policy Director Chris Plante told The News Tribune:

A person’s gender, in nearly 100 percent of people, is binary, determined at conception by the individual’s biology. To ensure integrity in our public records, official documents ought to reflect this biological reality.

But wouldn't public records have more integrity if they reflected the way that people really live right now?

Letting a transgender person reflect their actual gender on their birth certificate isn't going to actively hurt any cisgendered people, but it could provide important comfort and acceptance to a community that has faced far too much violence and hate.

The Washington Department of Health will be holding hearings and assessing the rule over the next few months, so stay tuned because some important change could be on its way.