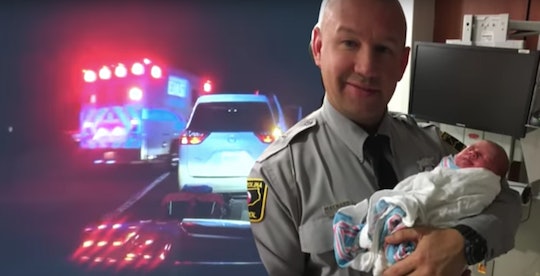 When you first find out you're pregnant, many medical professionals, doulas and midwives will encourage you to write down a "birth plan," stating your preferences in terms of where and how you'd like to deliver your child. Among the options many women often select are whether or not they'd like to have music playing, or deliver in a bathtub, or which special people they'd like present. But, as almost anyone who has had a baby knows, childbirth rarely goes according to plan, and this story totally exemplifies that. A state trooper helped deliver a couple's baby after stopping them for speeding, and TBH, it's a really sweet story.

Realizing that his wife was about to deliver, Jimmy Baker was driving 85 MPH down the highway when he was stopped by North Carolina State Highway Patrol Trooper Sgt. Brian Maynard, according to People. Minutes after they were pulled over, Baker's wife, Laura, began to deliver her baby, as CNN reported. Realizing that they were completely out of time and options, Maynard called EMS but geared up to help deliver the baby himself. Though the ambulances did get there in time, there was no way to get Laura into one, and she ended up having her baby right there on the side of the road, according to WAFF.

What might sound for some people like a horror story, the couple and Sergeant believe was a pretty beautiful encounter.

“As soon as we pulled over, my water broke,” Laura told KFOR, a local news station. “My husband jumped out with his arms up, saying, ‘My wife’s in labor and I really need help!’"

Believing he was just "in the right place at the right time," Maynard was happy that he got to help the couple. “I said, ‘Okay, well we’re going to do this right here me and you.’ I contacted EMS, got them on the way, grabbed my gloves, blanket,” Maynard told WTVD. “It was interesting. it was scary. I just tried to do the best that I could do with things I’ve seen on TV and things I had heard. Relieved that everything went good.”

Laura went on to tell the news station that her husband and the trooper didn't have any prior experience with labor and delivery, but that they really teamed together and made sure their daughter was delivered safely.

“My husband and the trooper were nervous, because they certainly weren’t prepared,” she told the news outlet. “Without them, I don’t know how successful it would have been. It was maybe a five-minute experience, but a vital five-minute experience. [The EMS team] did everything to make sure it was sanitary and healthy.”

Maynard went on to say that he's glad for the experience, calling it an "amazing" thing to be a part of, according to People. “For so many years, I’ve seen a lot of death,” he told WSCOTV. “To be a part of the process that actually brings a life into this world is absolutely amazing.”

Despite some stories you hear such as this one, and the trope in the media that shows a lot of TV and movie characters giving birth in odd places, like their cars, the Centers for Disease Control and Prevention (CDC) actually reports that having a baby outside of a hospital is kind of a rare thing. In fact, the agency notes that approximately 59,000 American babies are born outside of hospitals each year, and that those deliveries represented only 1.5 percent of the total births in the year 2014.

All in all, though you definitely want to heed your medical professional's advice and time your contractions in order to get to the hospital or birthing facility on time (if that's how you'd like to deliver) you don't have to worry, because car births aren't super common. Regardless, they make for pretty incredible stories either way.

More Like This
Alec & Hilaria Baldwin Welcome Baby #7, And Revealed Her Cheerful Name
Leonardo DiCaprio Nearly Had A Role In 'Hocus Pocus' & More Fun Facts You Didn't Know
Gabrielle Union Admits She May Be Becoming A Bit Of A Dance Mom With 3-Year-Old Kaavia
'The Proud Family: Louder & Prouder' Is Returning For Season 2 On Disney+