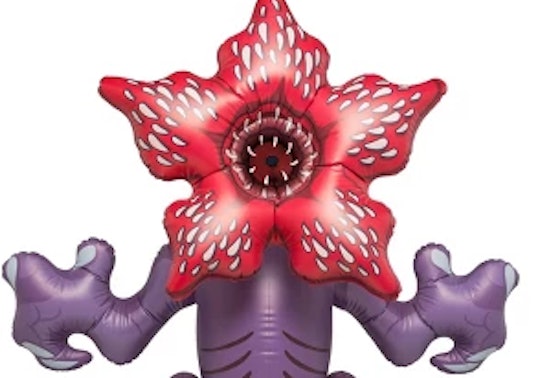 Stop Everything Because There's A Demogorgon Sprinkler For 'Stranger Things' Fans

I don't know if you guys have been watching Stranger Things 3 and just in case you haven't I'll be extra careful with the spoiler alerts, but let me just say public pools are sort of out for me this year. For several reasons, not the least of which being that Billy the lifeguard on the series is pretty much a body-shamer of epic proportions and I don't need that in my life. So what's a girl to do if she wants to cool down but is loathe to hit the pool? Why check out this Stranger Things-inspired Demogorgon sprinkler, obviously. It's 6-feet tall and looks utterly deranged, perfect for any Hawkins' fans out there who want to get cool in the relative safety of their own lawn. Although if your town is like Hawkins... you just never know.

Have you ever wished you could be a part of Stranger Things? You know, wear Eleven and Max's clothes because those outfits were all I ever wanted when I was in grade seven yes I am old. Or go to Starcourt to sample some mint chocolate chip from dreamy Steve Harrington in a sailor outfit at Scoops Ahoy?

Or how about visions of having a 6-foot tall Demogorgon spew water at you through its mouth of many teeth?

I can help you with that last one only, by way of pool supply company BigMouth Inc. plus Target and Amazon.

That's right, BigMouth Inc. has created a sweet homage to the Stranger Things universe that will both keep you cool and keep your lawn irrigated, will wonders never cease? And the company also managed to make the Demogorgon inflatable sprinkler look at once terrifying and conversely rather cheerful. As Amazon notes in the product description, it is "adorned spiky teeth, the flowering head of a monster, and a giant purple body, The BigMouth Inc. Demogorgon Yard Sprinkler may look terrifying but trust us when we say it’s nothing but fun."

This sprinkler hooks up to any old standard garden hose, and if you really want to feel like you're living in Stranger Things times circa 1984 just go ahead and take a drink right from that hose.

This Demogorgon sprinkler retails for $100 plus shipping and taxes at Target and Amazon, and if you're worried about how exactly you are going to manage to inflate a 6-foot tall Demogorgon it comes with a kit for that as well as anchors and such.

If a Demogorgon spitting water all over you isn't your thing, there are plenty of other options to show your love for Stranger Things this summer while also staying cool. Like stopping into Target for some tubs of USS Butterscotch and Mind Flayer Mint ice cream, courtesy of Steve Harrington's gig at Scoops Ahoy along with Baskin Robbins.

I say why choose? Why not set up the Demogorgon sprinkler in the back yard and then have some Stranger Things-themed ice cream? Because it's simply too hot outside to be forced to make such difficult decisions.

More Like This
The Best Bluey Costumes For The Whole Family
Can Elderberry Help Prevent Illness In Kids? Doctors Weigh In
16 After-School Snacks For Hangry Kids
Tips For Apple Picking With Kids