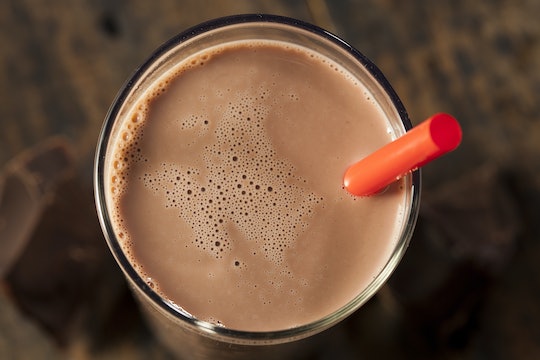 I might be one of those moms who baked cupcakes for my sons' classes. It won me piles of points with the under-12 set, but not too many with the teachers. I got it: I was imposing sugary snacks on a whole classroom. I gave it up, because I realized it wasn't fair of me to make dietary choices for an entire classroom of other people's children. Only my own... but definitely my own. That's where I drew the line and I got to pick which snacks I bake up for my own family. So when I read about a teacher shaming a working mom for letting her son have chocolate milk at school, it really got my goat. Because there's promoting healthy eating, and then there's simply meddling in the way people are raising their children. It's a slippery slope, my friends, and all too easy to slide on down.

Romper has reached out to both parties for comment on the reported incident and is awaiting a reply.

Constance Hall, an Australian blogger, clothing designer, and working mom to six kids, had a recent incident with her 5-year-old son, Arlo, which she recounted on her radio show The Queen Sesh. As she told it, Arlo asked his mom not to give him chocolate milk at school anymore (can you imagine any 5-year-old having to say those words?) because "the teachers don't let me have it."

The Mirror reported that little Arlo was asked to drink his chocolate milk at lunchtime instead of during recess (which is planned a bit differently over in Australia) and his mother reportedly wasn't impressed that her son was centered out.

So I said to the teacher, really? The options are that or juice and because he can’t have any bread or anything substantial I give him the milk to line his tummy a bit because he’s probably hungry.

According to The Mirror, Hall went on to say that she had suffered through several "awkward lectures" from the teacher about her son's food choices, and was even told she fed him "the worst breakfast ever."

Many schools all over the world have taken initiatives to encourage students to eat healthier foods, and it's definitely a good thing — that it, until it becomes about something else. Until it becomes less about common sense and moderation and more about unilaterally imposing rules on small kids in a way that makes them feel wrong. Until a parent is made to feel as though their parenting choices are no longer their own choices. That if they don't tow the party line they'll be judged and found inadequate using an entirely unacceptable scale. As Hall wisely pointed out on her radio show:

There are other mothers who can’t even afford to do lunch orders and then for them to get shamed about what they’re giving their kid for recess, I just don’t like it ... It feels icky to me.

Icky indeed. At the end of the day, teachers are meant to instruct children and parents are meant to raise them. Supporting each other in this quest is vital; demeaning each other is useless. Let's focus on the bigger picture here, kids, and let a kid enjoy his chocolate milk.

Heck, I might even go pour myself a glass right now. How do you like them apples?