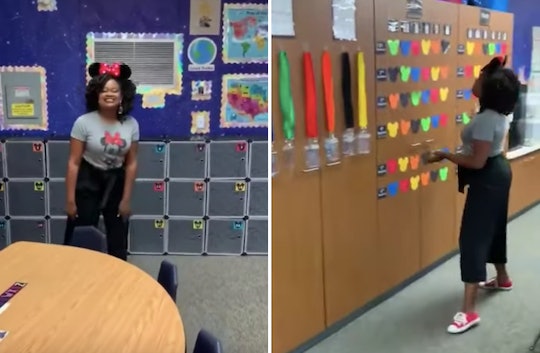 I think if you're the kind of person who wants to teach kids, you are probably already a special kind of awesome. Especially when that first day comes along, and you've maybe had the summer off to enjoy yourself. You've got a new classroom of kids coming at you, most of whom you probably don't know or haven't taught before. Some of us might buckle under the fear of the unknown — but that's why we are not teachers. Because people who love to teach children are coming at life from a more evolved angle, I think. I mean, check out this teacher's video tour of her Disney-inspired classroom, for instance. Not only is she brimming with excitement and enthusiasm on the first day of school, she also paid for almost all of the cool little touches out of her own pocket. It's completely amazing and completely magical.

Carlanda Williams is a kindergarten teacher at Ayer Elementary School in Fresno, California, according Your Central Valley, and also apparently a huge Disney fan. On Aug. 11, she shared a video of her newly redecorated classroom on Twitter and Facebook, and it's a thing of beauty. Williams gave the entire cheerful classroom a little Disney makeover, and honestly the best part of the entire tour is her excitement to start the day and show her students their new learning space complete with stage, magical library, and Disneyland buttons.

Earlier this week, Twitter account StanceGrounded shared her video, which has now gone viral, catching the attention of celebs like Chrissy Teigen and Patton Oswalt, with more than 4 million views on the social media sharing platform alone. Perhaps because, as this Twitter user pointed out, it isn't just about her enthusiasm. "And she most likely went into own pockets to do this for her students. HEROIC considering teachers don't get paid much," StanceGrounded tweeted. "Teacher deserve to be paid like college educated professionals."

The average kindergarten teacher in California makes about $16.99 per hour, according to Indeed, and while this is around 22 percent higher than the national average, it isn't a whole lot. And it's definitely not a whole lot when teachers like Williams are using their salary to make sure their classrooms are inviting and magical spaces where children can learn and grow. Especially if they get to learn and grow in a place that's designed to feel like they're visiting Disneyland.

Williams' video has people on Twitter sharing their appreciation for her hard work and passion by adding items to her Amazon Wish List for her classroom. As one fan of hers noted, he hopes his own child has a teacher like her one day and wanted to show his support. "Sent you some stuff too! I have a toddler and I hope he has a teacher like you one day!" one Twitter user replied.

It is ridiculous that teachers are expected to outfit their own classrooms, of course. In a perfect world, Carlanda Williams would not have had to pay to make her classroom magical, but this is not a perfect world. At least we can rest easy knowing there are teachers like this one out there, people who genuinely love their jobs and care deeply about the kids they are helping to shape. It's teachers like Carlanda Williams who are truly making classrooms the happiest places on earth.

More Like This
These 21 Educational Board Games Are Perfect For Homeschoolers
Can We Fix The One Big Problem With The PTA?
Where To Buy School Uniforms, From Jumpers To Dress Socks
These Back-To-School Supplies On Amazon Are Total Wins